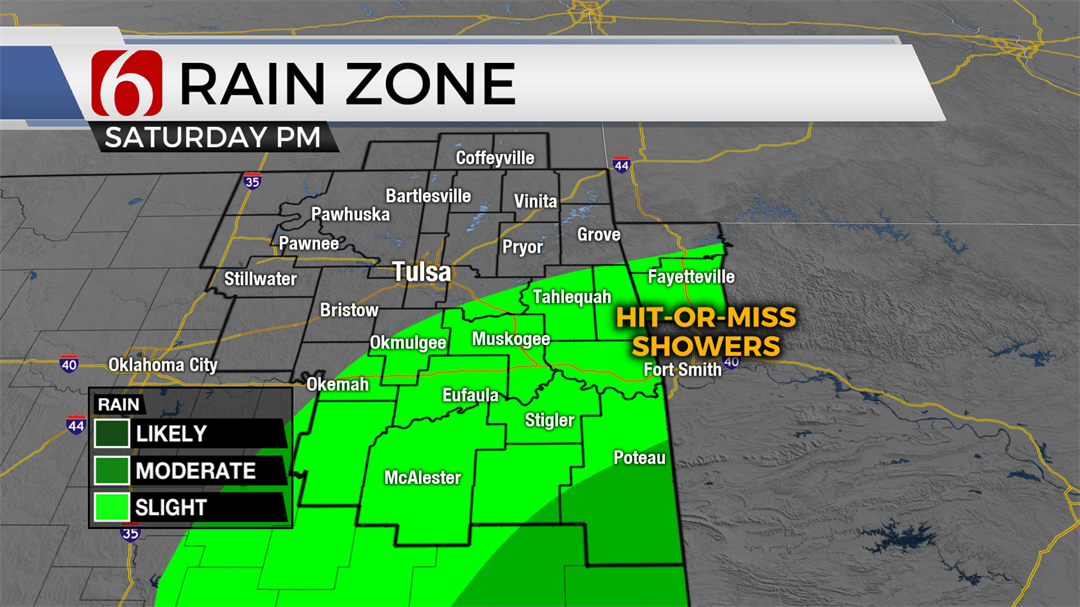 Slight rain chances are returning to the forecast for eastern Oklahoma this weekend, courtesy of Hurricane Barry.

Hurricane Barry will make landfall along the Louisiana coast Saturday as a very slow-moving storm. While that’s taking place, we’ll be back to pretty seasonable July heat. Look for partly sunny to mostly sunny skies with highs in the lower 90s for our Saturday. Unfortunately the humidity will be on a slight increase today, meaning heat index values could be back in the upper 90s to near 100, especially across southeast Oklahoma.

A few hit-or-miss showers or downpours are possible today as a few outer rain bands from Barry move from Arkansas into Oklahoma. The best chance for any of these showers looks to be primarily east and southeast of Tulsa. Any rain should be fairly brief and fairly isolated, but some locally heavy downpours would be possible so just be aware!

Bands of clouds will continue to filter into eastern Oklahoma on Sunday as the remnants of Barry inch closer to our area. Once again, a few of those brief hit-or-miss showers could occur during the day. And with more clouds around, our temperatures should be a few degrees cooler in the upper 80s.

Impacts from Barry look to be highest for eastern Oklahoma on Monday, as what’s left of the tropical system moves right across Arkansas. Showers look to be a little more likely Monday, again particularly east of Tulsa. But with much cloudier conditions expected, temperatures are likely to hold in the 80s for many of us with a nice northerly breeze.

Enjoy that brief cool-down Monday, but it looks like nothing but sizzling summer heat after that! A strong upper-level ridge looks to take hold beginning Tuesday, which means minimal rain chances and much hotter temperatures. We’ll be back in the mid 90s on Tuesday, and approaching the upper 90s for mid to late next week with heat indices well over 100. It looks like we may be in for an extended heat wave, so get ready!

I hope you have a wonderful Saturday, Green Country! You can follow me on Twitter @StephenNehrenz as well as my Facebook page Meteorologist Stephen Nehrenz to stay up to date with the very latest!