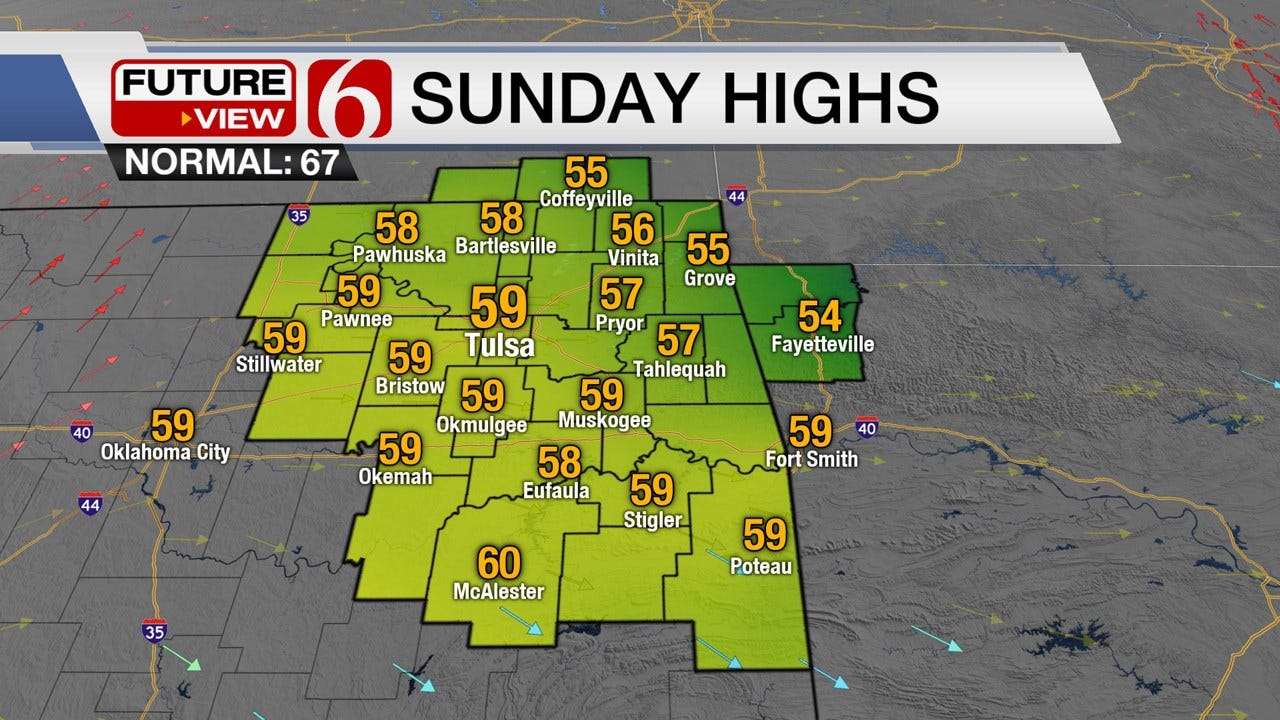 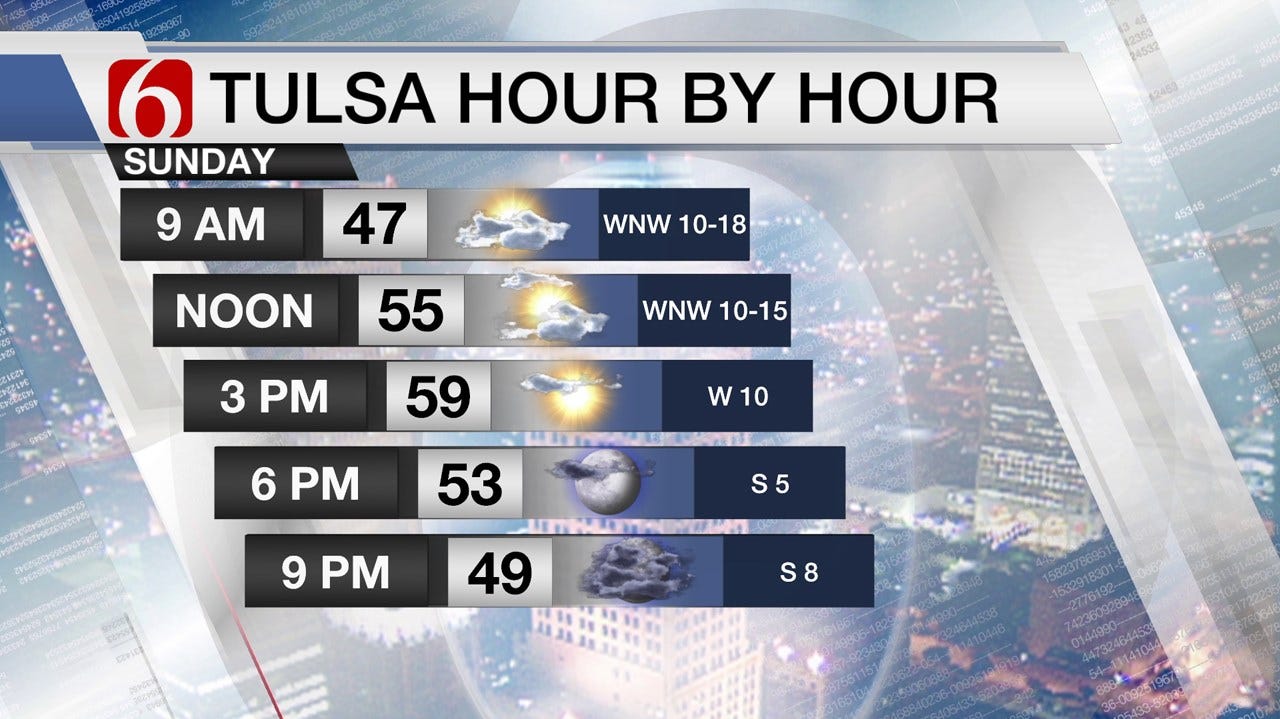 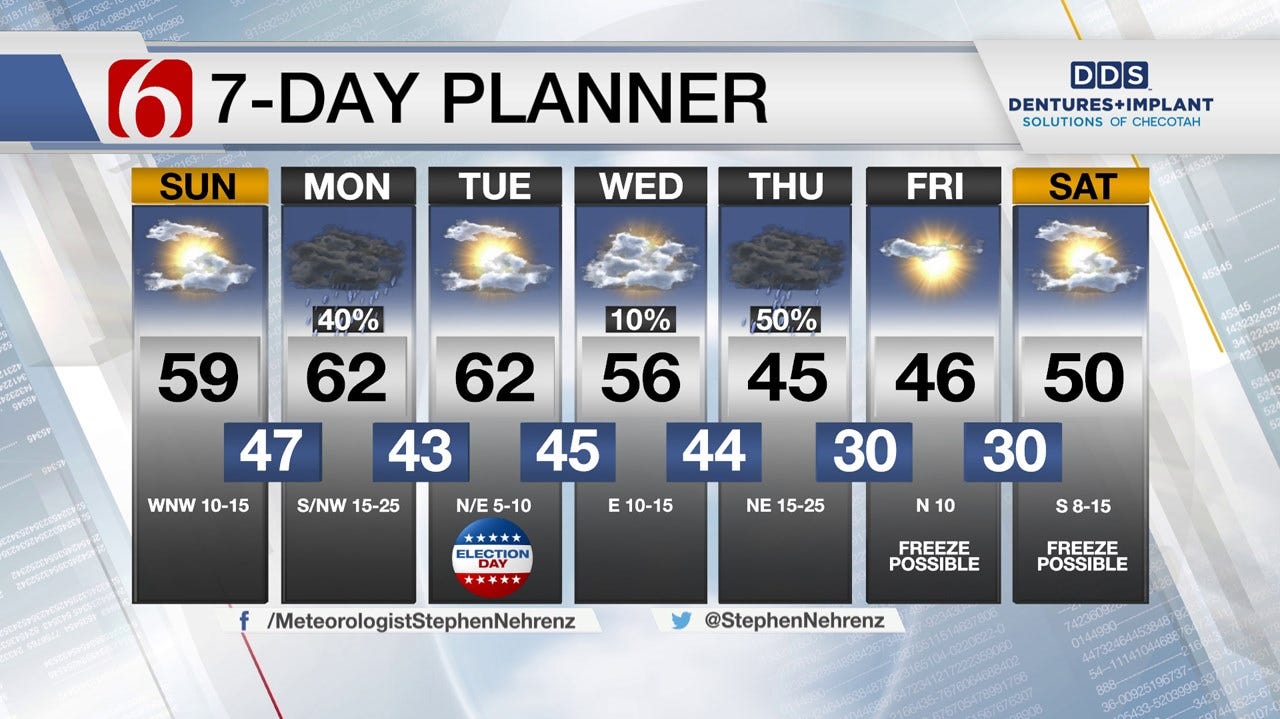 In the wake of Saturday night’s rains, drier and chillier air is returning to Green Country to wrap up our weekend.

Areas of lingering clouds during the morning will give way to partly to mostly sunny afternoon skies. Despite some sunshine, it will be a noticeable cooler day across Green Country with highs generally in the upper 50s. A brisk west-northwest wind around 15 miles per hour will steadily diminish during the afternoon.

Our next quick-moving low pressure arrives on Monday, bringing us another chance of showers and storms. Showers will be most likely near the Oklahoma-Kansas line Monday morning, with widely scattered storms trying to develop across the rest of eastern Oklahoma Monday afternoon into Monday evening. A few storms could become strong to severe later in the day Monday, primarily across far southeastern Oklahoma. We’ll stay cool again on Monday with highs in the lower 60s.

Drier conditions will filter back in for election day on Tuesday, so the weather will not be an issue as you head to the polls! We’ll see some periods of sunshine return Tuesday with highs again in the lower 60s. Clouds will be on the increase once again on Wednesday as a storm system set to bring us some much colder air takes shape.

All signs continue to point to a chunk of much colder air breaking loose from Canada this week, and by Thursday into Friday some of that will surge into Green Country. This looks to be our chilliest air of the season so far! Temperatures will likely hold in the 40s all day Thursday with drizzle and strong north winds, and by Friday morning our first freeze of the fall will be possible. It looks like the growing season may come to an end by the end of the week! We’ll continue to keep you updated on this blast of chilly air throughout the week.

Have a wonderful Sunday, Green Country! Be sure to follow me on Twitter @StephenNehrenz as well as my Facebook page Meteorologist Stephen Nehrenz to stay up to date with the very latest!