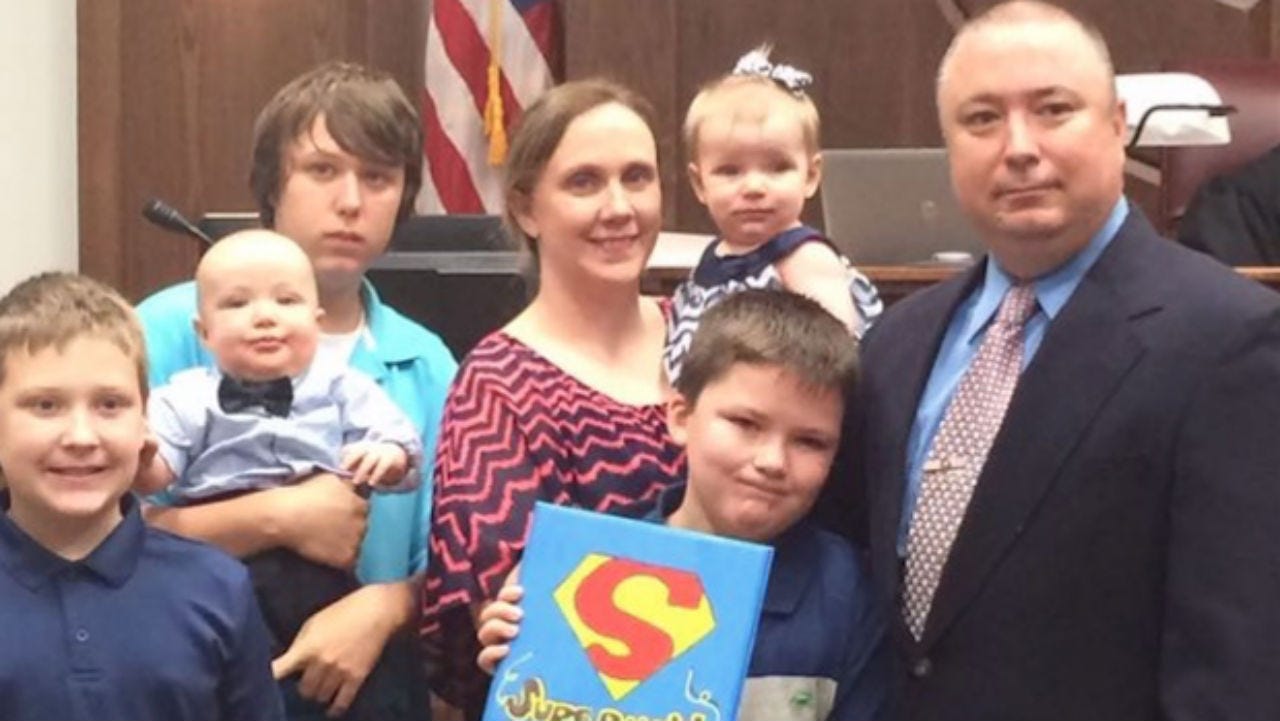 Two years ago, Officer Jody Thompson was pulling into the parking lot at the Poteau Police Department to drop off his partner when he overheard a dispatch about a case of physical child abuse.

Thompson wasn't on duty at the time, but he responded to the call and offered assistance. Before he joined the department 16 years ago, Thompson was an investigator for the district attorney's office, where he handled dozens of abuse cases.

When Thompson arrived at the scene, he was stunned to see a severely underweight boy -- his wrists bound by belts, with bruises along his back and a huge knot on his head. The 8-year-old boy had been submerged in a trash can full of cold water.

He weighed just 61 pounds at the time.

"He did not have a spot on his body that didn't have a bruise or abrasion," Thompson said. "It was the worst thing I've ever seen."

After covering the boy, who was named John, with a blanket, Thompson took him to an Oklahoma Children's Advocacy Center so detectives and investigators could take photographs. When they were done, Thompson drove him to the emergency room.

"I sat with him," Thompson said. "And when he was admitted into the intensive care unit, I sat all night until the next day."

Thompson refused to let John out of his sight. He knew from the first moment he saw him he wanted to take care of him for the rest of his life.

"When I'd seen him in that house shivering and his hands tied -- just soaking wet and confused -- I knew at that moment the only time I would be satisfied and sure that he was safe is if he was with me," Thompson said.

The next day, Thompson contacted the Oklahoma Department of Human Services to become a certified foster parent. A couple days later, he brought John home.

"At the time, I had a 15-year-old son and an 8-year-old son. When I brought John home I didn't tell them or my wife," Thompson said. "Everyone knew... they trusted I was doing the right thing before they even knew what happened and heard the story."

Thompson welcomed John into his home on April 30, 2015. Two days later, he found out his wife was pregnant with their third biological son.

"But the story gets even more incredible," Thompson explained.

Nearly 7 months later, on November 3, 2015, DHS called to inform the Thompsons that John's mother had given birth to a baby girl while in jail. Officials asked the Thompsons if they would be interested in fostering her.

"We literally picked her up in the hospital the next day when she was a day old and brought her straight home," Thompson said. "Never in my life did I dream of having a large family, but God had different plans and so here we are. And I'm loving it all."

Thompson formally adopted John in August after his biological parents, who are both incarcerated and awaiting criminal trials, relinquished their parental rights. However, they refused to relinquish rights for their daughter.

After a lengthy jury trial and an appeal, the parents' rights were terminated and the Thompsons were able to adopt their little girl, Paizley, on February 16.

"[John's] the toughest guy I've ever met," said Thompson, explaining that his son had to testify on his own behalf during the trial.

Though it's difficult, Thompson said his family is ready to put the past behind them.

"John is amazing. He's a straight-A student, on the honor roll, in the gifted and talented program, involved in the local drama club," Thompson said of his now 10-year-old son. "That kid's very resilient. He bounced back from this."

On Tuesday, Thompson received a certificate of commendation from the Oklahoma Bureau of Investigations, and John stood by his side as he graciously accepted it.

"Jody's actions as well has his families are second to none. The example of love and compassion he has shown to this young man and his sister is an example everyone should follow," Poteau Police Chief Stephen Fruen said in a statement. "It's men like you that make me proud of our law enforcement brothers and sisters. You are very deserving of this commendation. I am proud to serve with you."

Thompson said John just recently decided to share his story in hopes of helping other abuse victims like himself.

"We went through something bad, but we're not going got let it define who were are. We're not going to let this hold us back," said Thompson. "Always have compassion, you never know what you're going to walk into."