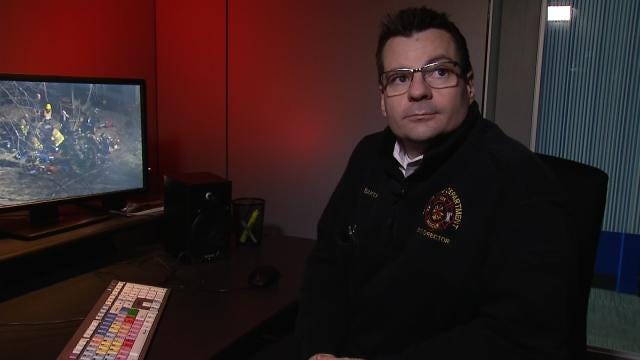 The scene that played out beneath Osage SkyNews 6 HD in a Monday injury house fire was a hectic one. Five people were pulled from a burning, smoke-filled home, and Tulsa firefighters administered life-saving techniques on a front lawn.

What may have looked like chaos from the air was actually a well-rehearsed operation for Tulsa firefighters. Tulsa Fire's EMS Chief Michael Baker explained how crews put their training into action.

"Everyone has a role at the fireground; everyone has a specific assignment," Baker said. "So we will specifically task people with making rescues and providing emergency medical care."

In the video shot from above, you see a company officer making radio contact with dispatch, telling them what's going on at the scene and that they are working on patients.

As some team members make initial actions to check for a pulse, others are working to get the victims oxygen.

At the same time medical care is given to the victims already removed from the home, firefighters are making entry to look for other victims and fight the fire.

Baker pointed out a thermal imaging camera in the hand of one firefighter entering the home.

"That is a camera that allows us to see through the smoke," he said. "Very, very important in the removal of victims and the rescue of victims."

Fire department medical personnel then move up to do more advanced procedures on the victims lying in the front yard. Their job is to get an intertrachial tube into the victim's airway before the airway swells, Baker said.

The patients have all breathed in super-heated gas, and they're not breathing effectively. Establishing the airway in children is especially critical to saving their lives.

"Very, very difficult," he said. "Obviously you are working under extreme conditions here."

A firefighter who is also a paramedic goes by carrying what is called a pediatape. He does an organized, color-coded weight measurement on the children so correct dosages of medicine can be administered.

A cynokit is administered to the patients who have been exposed to toxic gas, the results of plastics and other things burning in the home.

"And that's really why we're here."

As of Tuesday evening, all five victims of the fire were still being treated for their injuries.