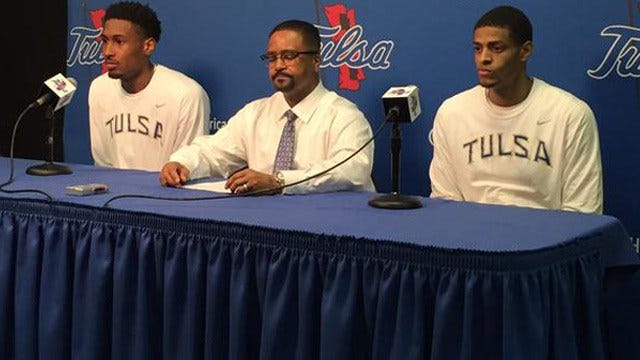 The Golden Hurricane is a force to be reckoned with, extending its win streak to 11 games and remaining undefeated in conference (9-0), after the team's 78-71 overtime victory over USF at home.

TU got off to a slow start, trailing the Bulls 8-0 in the opening minutes of play.

The Golden Hurricane didn't stay behind for long, cutting USF's lead to three after James Woodard and Shaquille Harrison combined for a few buckets.

Brandon Swannegan stepped up with just under ten minutes, knocking down three consecutive buckets in the paint to help TU gain a 19-17 lead over the Bulls.

Rashad Smith fed off  Swannegan's energy, and it showed when he snagged the fast break bucket, increasing the Golden Hurricane lead by two. He proceeded by hitting a jumper in the paint, helping his team in its endeavor to get a comfortable lead.

WHAT WENT WRONG FOR TULSA

-Struggled to get shots to fall and missed some easy buckets

Harrison came out the gate scoring on the first offensive possession of the half. USF answered back with a three, extending its lead 36-32.

TU took a one-point lead over the Bulls when Harrison cut across the lane for a massive dunk.

The teams went back and forth, but TU couldn't manage to regain the lead. That was until Harrison put up a rebound under the basket at the 12:27 mark (45-44).

At this point, Smith was a major factor, (scoring most of the second-half buckets that led TU to its comeback lead).

As time got low, TU turned up. With three minutes on the board, Woodard hit two back-to-back threes, tying the game at 57-all. He then drove into the lane, attracting a foul. With Woodard making one from the line, Tulsa took the lead again.

Allen Jr. missed the three-point attempt for USF, sending the game into OT.

Woodard kicked off OT with a three, giving the Golden Hurricane a slight advantage. USF went on to answer with a deep-wing jumper from Collins.

The teams then exchanged a couple of jumpers, before Smith sank another Golden Hurricane three.

Allen Jr. answered a few shots later with a three for the Bulls. Smith wasn't having that, sinking his second OT three.

In the final seconds, free throws led Tulsa to victory.

-The game was tied nine times and featured 15 lead changes.

on the 9-0 conference record: “I think the guys are just getting better. They're working hard. We have tough minded kids.”

on what he tells his players: “Stay true to who you are; play to your strengths.”

on what he was telling his players in those final huddles: “We have to defend, we have to guard!”

On the loss: “I'm really proud of our guys... TU's a good team, the only unbeaten team in the conference."

On what contributed to USF's loss: “Swannegan was incredible on the boards, [and] they made the threes down the stretch.”

TU returns to action Thursday, February 5, in Texas to take on Houston at 6:00 p.m.