Dick Faurot's Weather Blog: So Far a Dreary December; Any Sunshine for the Weekend? 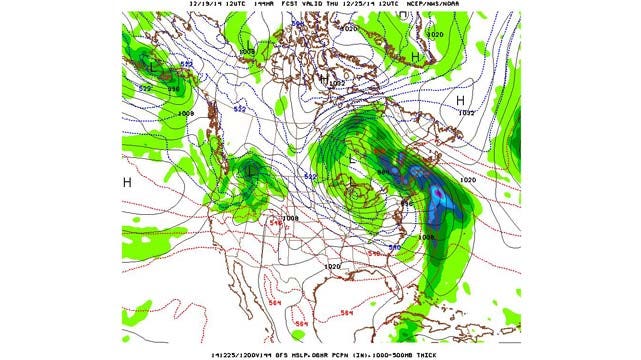 If the month of December has so far seemed rather gloomy, you are correct. Normally we would have had about 10 days of fair to partly cloudy skies up to this point. So far, we have only had two as overcast skies with periods of fog/drizzle have been much more common than usual. There are a number of reasons, one of which can be attributed to the relatively light winds such as we have had the last couple of days. The low level moisture that is trapped over us has not been blown away by strong enough northerly winds to bring in drier air or mix out the moisture within a deeper column of air. Also, the sun angle at this time of year is at its lowest point so the solar radiation is not sufficient to burn the clouds off either.

Having said that, our prospects for sunshine this weekend are tenuous for those same reasons. A layer of moisture remains trapped near and just above the surface. Our winds will be very light for tonight and Saturday with light and variable winds overnight and a light southerly breeze during the day. However, we are on the backside of a system aloft so there should be some downward motion of the air aloft over us further limiting the moisture layer just above the surface. That may be just enough to allow the sun to thin out the clouds and give us at least some sunshine on Saturday. The guidance is split with some of the solutions suggesting lots of sunshine, others keeping us overcast. For now will split the difference and call for partly sunny skies through the weekend and into Monday as well. Don't want to get your hopes up too high for sunshine given the conflicting guidance.

The clouds will also have an impact on temperatures. Morning lows should be just above freezing tonight, near 40 to start the day Sunday, and the mid 40s for Monday morning. Brisk southerly winds will also help hold up our morning temperatures for Sun/Mon. Daytime highs will be most affected as the clouds should be just enough for daytime highs in the upper 40s Saturday, lower 50s on Sunday, and mid 50s on Monday. Obviously, if those clouds do thin out more, then our daytime highs in particular will be at least several degrees warmer.

Another cold front will arrive late in the day Monday followed by gusty northerly winds for Tuesday and NW winds for Christmas Eve. That will finally mix out the moisture enough for us to have lots more sunshine for that time frame. Despite the gusty northerly winds, this is not a particularly cold system as the high pressure ridge behind it is primarily of Pacific origin. Therefore, Tue/Wed will be cooler but actually closer to the seasonal norms for this time of year. Also, the front may set off some showers on Monday into Monday night, but the chances remain only around 20% for now.

That brings us to Christmas Day and I have been discussing the flip-flopping model solutions leading up to Christmas in this forum for over a week now. The latest/greatest guidance has been more consistent over the last couple of days in slowing down and weakening a cold front that now appears to not reach us until the morning after Christmas; in other words, Friday morning. That means Christmas Day itself will have gusty southerly winds in advance of the approaching cold front, fair to partly cloudy skies, and warmer than normal temperatures. The day should start in the 30s which is warmer than normal and afternoon highs will likely be well into the 50s which is as much as 10 degrees above normal. The only real issue is the winds as gusty southerly winds of 20 mph or more are expected.

The Friday after Christmas should have gusty northerly winds and another cool down with daytime highs in the 40s. Also, this system looks to only produce a slight chance of precipitation and no travel issues anywhere nearby are currently anticipated.

In fact, notice the map which shows one of the model solutions (GFS) valid for Christmas morning. By the way, the European model which is not shown is very similar leading to another layer of confidence to this particular solution. As you can see, a significant storm system will be affecting the Great Lakes with wind and snow and another one will be moving through the Rockies. Much of the country between those two will be high and dry through Christmas Day, including the state of Oklahoma.