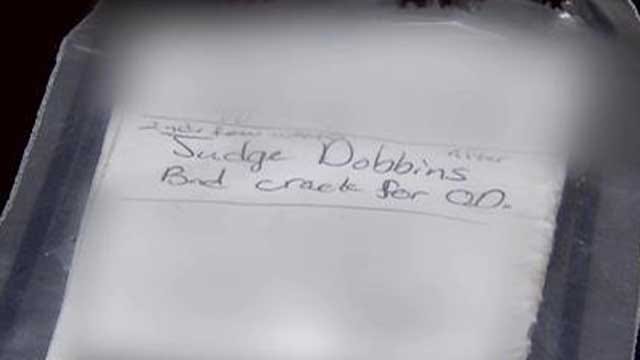 A routine drug bust turned up a supposed hit list. The judge is just one of four names on the list, but all the names are players in a Cherokee County custody battle.

That judge on the alleged "hit list" presides over a courtroom at the Cherokee County Courthouse.

The District 27 Drug Task Force used one of its own agents to act as a hired gun in the sting operation that led to the arrests.

Agents believe Raymond Gist was selling drugs out of his Tahlequah apartment but would never suspect him of trying to kill someone in exchange for cash.

When agents raided Gist's apartment they said they found a note in a kitchen drawer.

Investigators said the note includes several names and details the ways they planned to kill someone.

One of those names stood out: Judge Dobbins, and under his name -- "bad crack, OD" for overdose.

When Drug Task Force Agent Mike Moore believed this list was legit, agents set up a sting operation to see if the man who they said paid Gist $300 was serious about hiring someone to commit murder.

"We wanted the evidence," said Mike Moore from the District 27 Task Force. "We wanted it now, because we didn't want anyone to get hurt."

Agents said Gist told them he was just the middle man in this murder for hire plot.

"They actually paid our undercover agent to finish what Raymond didn't," Moore said.

Agents said Sam Chadwick provided them $18 in cash and a set of knives and axes in exchange for the killings.

That's all the agents said they needed to prove Chadwick, his fiancée, Martina Williams, and Williams's sister were serious about carrying out a hit list to kill Judge Mark Dobbins and three family members.

"The custody battle wasn't going in her favor," said Moore. "Basically everybody on this list was somebody who was affecting her life."

District Attorney Brian Kuester's office is now reviewing the case and determining what charges will be filed.

"Regardless of who's on the list, if somebody planning and taking active steps towards killing another human being, that's a serious, serious crime," Kuester said.

Prosecutors expect to file charges in a week. Drug task force agents said this whole exchange is recorded on audio.