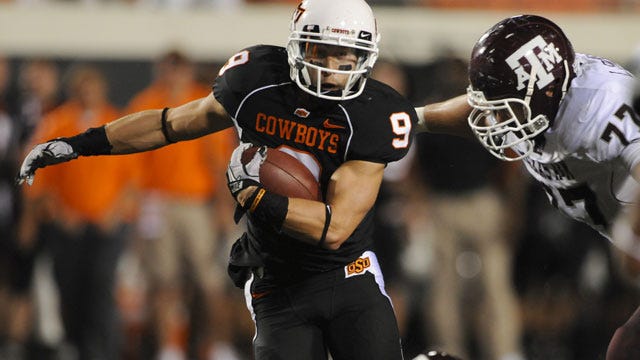 News On 6 sports reporter Charlie Hannema spoke with former OSU wide receiver Bo Bowling, who was mentioned in part three of Sports Illustrated's report into the Oklahoma State football program. Here's a transcript of the interview.

Charlie Hannema: You're in the first paragraph of this article today. What contact did you have with Sports Illustrated?

Bo Bowling: I was never contacted by Sports Illustrated or spoke with them, I didn't have no idea I was going to be part of it.

CH: So you woke up this morning and read it just like everyone else and said, "Hey, what am I doing there?"

BB: I saw that they came out with the 5-part series, and I knew that I could be in there because of the drug thing, and things that have happened in the past, but I do think first paragraph was definitely a shocker.

CH: Just to make sure, they made no attempt to contact you? You didn't have missed calls from people that could have slipped through the cracks? Nothing at all.

BB: Nothing at all.

CH: Does that surprise you at all?

BB: I mean, it's surprising, yes. At the same time, what they wrote was just public knowledge. That's the police report they got, or what was written in the papers when it initially happened. That's all the investigating they did. They just took what somebody else wrote and re-wrote it. They didn't investigate what happened afterward, or what happened after the whole court deal, like none of that. To say it's true, I guess the charges and allegations are true, but it turned out that I ended up pleading for two misdemeanors and taking a different deal.

CH: Take me through that process because I know what you pleaded to was reduced, can you explain how that process went?

BB: I was initially charged with three felonies I think they were saying. I went to Coach Gundy, and he was worried for me. It was a shock to him. I brought this on Oklahoma State, it was nothing that they knew about, or my teammates knew about, this was just all my mistakes. So I got charged with this, and initially he did what he had to do and kick me off the team. I knew that I wasn't doing the things that they were saying, but it was put in the paper just like all this stuff in the paper about Oklahoma State is allegations. A lot of people turned their back on me, but I through the court a year later and ended up taking their plea which was misdemeanor possession of marijuana and misdemeanor paraphenalia, and I ended up getting 30 days and staying 16 days in the Payne County Jail. I really wanted to fight it til the end, but I wanted to play football again, so I took the plea deal, and then I stayed in school until May, and that's when I approached Coach Gundy when everything was put behind me.

CH: What was the process like to get back on the team?

BB: After I got through all the court stuff, had my school lined up, did the 16 days in Payne County, I put everything behind me. That's when I approached Coach Gundy and said hey coach, I've still got eligibility. They didn't come looking for me, or anything like that, I went to them--and they had to think on it. It wasn't a right answer then, they started looking into it and seeing all the things I'd done from counseling to jail, to all the things I did to get back and put everything behind me. When he was okay with it, I had to talk to Coach Holder. Coach Holder was upset with me, you know, he wasn't happy, and he almost didn't let me back, but he made me sign a very detailed contract, you know, get drug tested weekly, and make sure I miss zero class, and the list goes on. I had to do all that, then he approved it, and then I got back on summer workouts and played that last year.

CH: Did you have to walk-on or did they give you your scholarship back?

BB: I had to walk-on, and pay for school and everything. They didn't give me no special treatment, if that's what SI's trying to say, and put me out like I'm a drug dealer and all this stuff because of charges that they're alleging me of...

CH: Did you ever sell drugs to anybody?

BB: Oh, no sir. Like I said, my coaches, teammates, no one knew anything about that, so to get them involved is a joke. Like I said, I brought that to Oklahoma State, and that's on me and my mistakes, and I had to pay for them. Coach Gundy and them changed my life by letting me get back on the team, and prove myself to them and to the team and to whoever else doubted me...so SI can sit here and try to make OSU look bad, but at the end of the day, you're making them look good because this story is a success story, and it changed my life. All of these allegations, I haven't seen none of that go on there.

CH: You said you got some counseling before you got back on the team. Did the team offer any counseling, or where did you go to get that?

BB: I went to Payne County just counseling. A separate thing from Oklahoma State, it wasn't with the team.

CH: Have you heard about this "Weed Circle" that they're talking about in the article?

BB: Other reporters have brought it up to me, and it's the first time I've heard that term "Weed Circle" or whatever it's called. I don't know nothing about it, and I wasn't involved in it. As somebody who was in trouble, you'd think that if there was something like that going on, I would know about it or be involved, but I didn't know, that's the first time I had heard the term, when you guys are saying it to me.

CH: What do you want people to know about your story that Sports Illustrated didn't write today?

BB: What they're trying to do is make me out to be a bad guy make me look like a drug dealer. Those are just the charges. I would encourage people to go look into the whole story. Look at what I had to go through, what I did to stay able to get back, then coming back, and the process of getting reinstated with Coach Gundy, Coach Holder and all of that. We had one of the best seasons at Oklahoma State ever that year. I got to go on and play in an all-star game, now I'm playing in the Canadian Football League. This is my 3rd year playing pro football. If it wasn't for Oklahoma State, Coach Mike Holder, Coach Mike Gundy, giving me the second chance and opportunity, you know, I wouldn't be doing what I'm doing, being a success story.

CH: How many of your teammates used drugs do you think? Were you aware of anything?

BB: They want to say rampant, that's nothing that was spoke of, talked about, or even heard of there. We played football. We came in and lifted weights in the morning, practice in the afternoon. I wasn't aware of nothing (anything). All these allegations, former players talking, I mean, I don't see any truth to it at all. I never seen it in my time from '08 to 2010.

CH: There are a lot of players talking, but not a lot of hard proof. How do you think so many people came together and alleged all these different things if there's not a little bit of truth there?

BB: Because now it's coming out and you hear all these guys talking, this guy didn't come up to them and say "hey I'm doing this story for SI.com, and doing a story about OSU and allegations against them. He went up there and talked to them like he was just a normal guy, didn't even say he was recording it, this is what these guys are saying. Obviously, the interviews were--they didn't know they were getting interviewed. Some of these guys they took out of context, other guys are just mad at Oklahoma State for whatever reason and are just saying things that are flat-out untrue. It's not a good deal, but bringing it up talking about it, these are just allegations. Let them come in and look and find the facts, and then, then make a judgment.

CH: Is there anything you want to hammer home that we didn't ask you about that you feel you need to get out?

BB: Just look at the whole story, and look how from top to bottom start to finish how it went down, and that's part of why I'm speaking out. I put them in that position and brought it on them, and I need to speak on it because Oklahoma State was not in the wrong, they did a good thing by giving me a second chance and letting me come back and change my life. That's the point that people have to see.

CH: Where do you think you'd be right now if they didn't let you come back?

BB: I don't know. I've been playing football since 1st grade. That's all I know. I love every part of it. I love training, I love what I do. I'm getting to play professionally. I have no idea what I'd be doing if they wouldn't have done that for me, and I can't thank them enough.