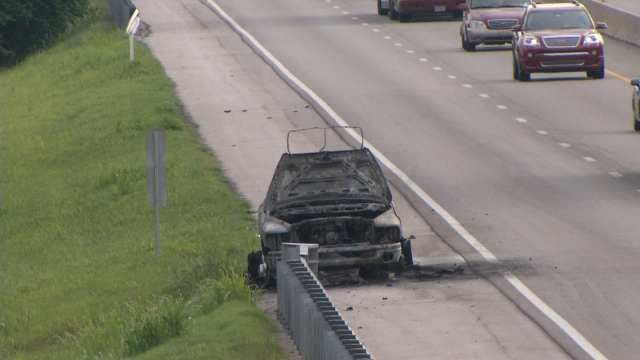 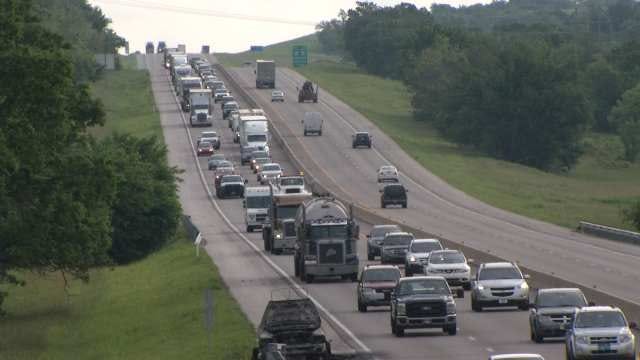 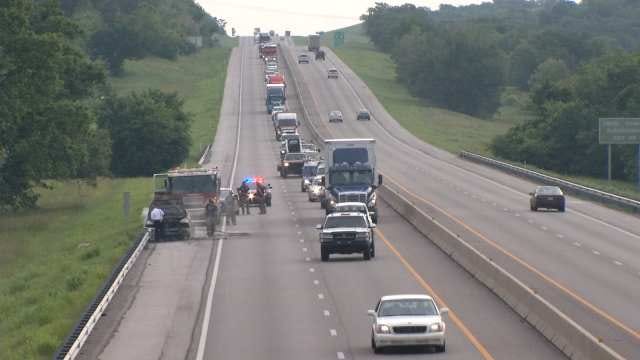 An Arkansas man says he is lucky to be alive after his pickup caught fire on the Turner Turnpike west of Kellyville Thursday morning.

The fire closed the westbound lanes of the highway shortly after 7:30 a.m.

Erick Villegas was driving to Oklahoma City to do some roof work and just west of Kellyville on I-44 he heard a sound coming from under the hood.

"All of the sudden it just started knocking so I pulled over and there was smoke coming from the bottom of the car so I looked down and there was a little bit of fire," said Erick Villegas.

Erick grabbed his backpack and ran away from the truck, capturing video of his pickup engulfed in flames.

"I was thinking of the cars driving by, scared of it blowing up," said Erick Villegas.

With three-quarters of a tank of diesel fuel and several aerosol cans in the bed, it was a time bomb.

"Anything could have popped and flew through the windshield and hurt somebody else, and we would have had a worse accident than what we already had. Luckily no one was hurt in this on," said Oklahoma Highway Patrol trooper Jared Sharp.

A semi driver stopped to try to put out the flames with a small fire extinguisher.

Sapulpa firefighters eventually put it out, leaving a charred skeleton of a truck behind.

Erick has a 2-month-old daughter and he and his wife had a special day planned for Thursday.

"Today was my third year anniversary and that's the first thing that came to my mind, my wife and my kid, my baby. I'm glad I'm still safe," said Erick Villegas.

The OHP shut down traffic while firefighters extinguished the blaze. Troopers re-opened the inside westbound lane a short time later. They re-opened the outside lane about an hour later.