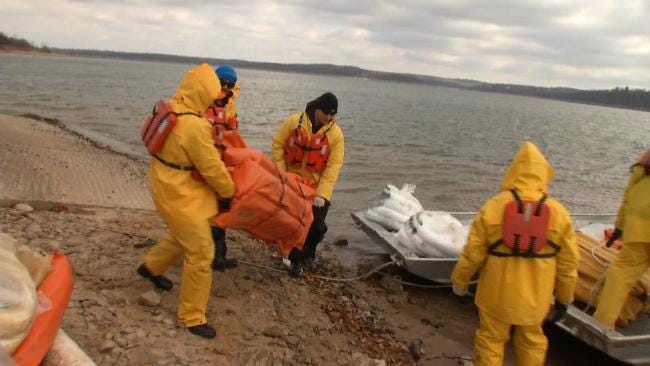 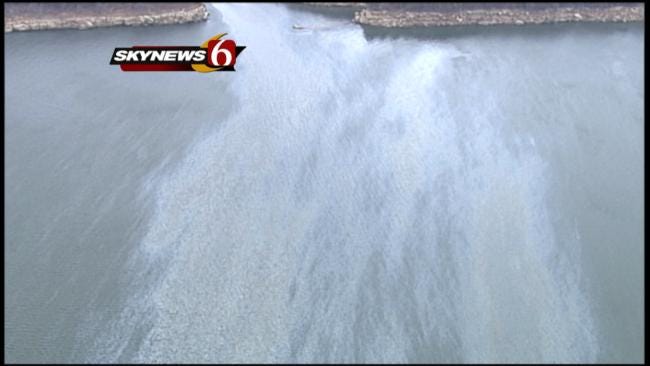 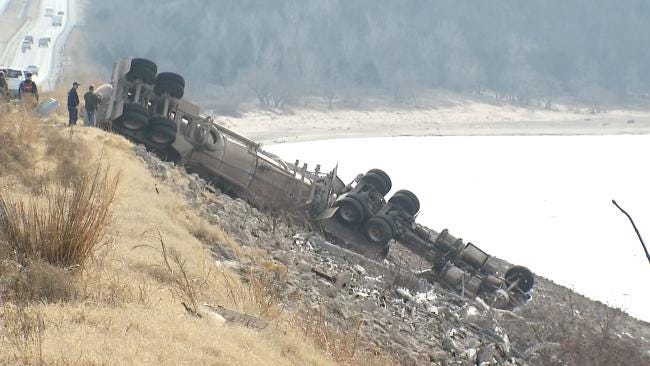 Work continues at Keystone Lake to clean an oil spill.

Around 5,000 gallons of crude oil was dumped into the lake on Saturday after a collision on U.S. Highway 412 in Pawnee County.

Crews had to take off on Tuesday because of the rain, but they were back at it Wednesday, working to get to soak up as much oil as possible before it filters throughout the lake.

Thousands of gallons of oil spilled into Keystone Lake on Saturday when the driver of a semi carrying the crude clipped the back of a car, which was driving under the posted speed limit with a flat tire.

The tanker busted through the guard rail and overturned a quarter time onto the rocks below the bridge.

"One drop of oil in water goes a long ways and it will make a big sheen," said Paul Koons of Environmental Remediation Specialists.

ERS had three boats and seven men on the water on Wednesday. Its first order of business was to place giant containment booms in the water.

"You have a flotation device, and then underneath it is what's called a skirt," Koons said. "It actually sits in the water, which helps act as a barrier to prevent the oil from migrating any further in the water."

Next up is what's essentially a giant sponge.

The booms float on top of the water and soak up the oil.

Each one is then gathered and taken to a specially approved landfill.

Koons said Tuesday's rain, a little more than an inch at Keystone Lake, helped wash some of the oil that was trapped on the riprap at the water's edge.

He said it's easier to clean it up from the lake than along the shoreline.

The big problem Wednesday was the strong wind.

"The wind helps move it, so we've been chasing it quite a bit," Koons said. "The weather and high winds makes it very difficult for us to maneuver in boats."

Road crews will be closing one lane of eastbound Highway 412 on the Keystone Land Bridge on Thursday while they work to replace a portion of the guard rail.

According to a crash report, the Oklahoma Highway Patrol determined the cause of the collision to be defective vehicle/inattentive driving. An investigating trooper also said in the collision report that the driver of the car had smelled of alcohol.

The car's driver and her passenger were treated and released from the hospital.

Keystone Lake does not provide a public water supply, and according to the U.S. Army Corps of Engineers dam generation was not affected and it is not expected lake wildlife will suffer from the spill.

The truck's driver was hospitalized in serious condition. There is no word on his current condition.