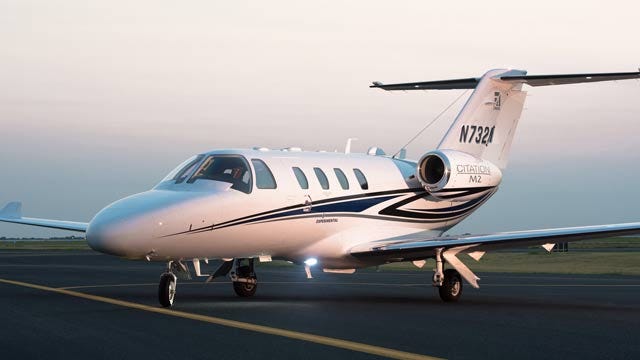 Cessna Aircraft has begun assembly of a new, light business jet at its plant in Independence, Kansas.

Cessna says the first Citation M2 jet is expected to roll of the line in April, with the first delivery of the $4.4 million aircraft slated for third quarter of this year.

"It's great to see production begin, and see a product take shape. The team members are ready, and they're thrilled to be a part of bringing the M2 to customers," said Lily English.

Cessna describes the M2 as a natural step up for owners of the smaller Citation Mustang, which is already assembled at the Independence plant.

The Citation M2 is larger -- with seating for six passengers and two crew members -- and faster, with a longer range of 1,300 nautical miles.

The forward and aft cabin assemblies and wings are built at Cessna's Wichita plant, then delivered to Independence for final assembly.

The 16-year-old Independence plant has nearly 500 employees. Opened in July of 1996, the Independence facility also manufactures the Citation Mustang and celebrated its 10,000th aircraft delivery during 2012.