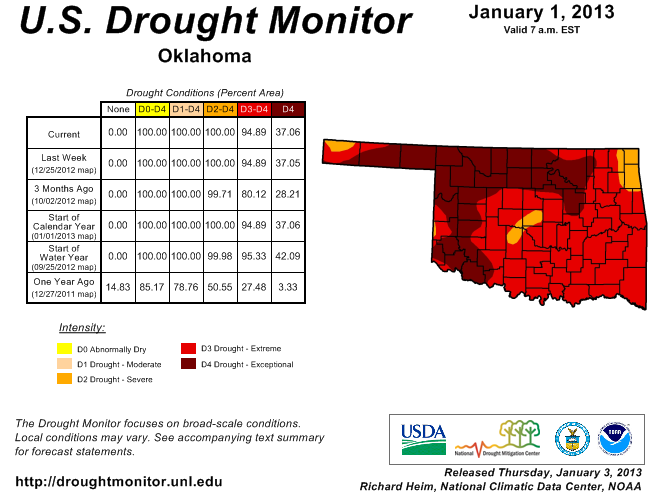 2013 is here, but so is our pesky drought. This big issue that carries over from 2012 may not be quickly remedied in the new year, even with some initial drought relief in sight. The attached map shows the most recent Drought Index for Oklahoma. Despite a widespread inch of rain falling on Green Country, no change for the better was seen. According to the Oklahoma Mesonet, the moisture never made it to the deeper soil levels and did little to help our sickly lake levels.

This first week in 2013 is all but bone-dry. A potent disturbance may be able to squeeze out a few raindrops or snowflakes in our region late Friday night. Beyond that, we'll have to wait till next week before hope of better moisture return. A strong storm system will sweep into the Southern Plains midweek next week. It will draw up lots of Gulf of Mexico moisture. If the system becomes cut-off from the main flow of upper-level winds, it will sit and spin a bit longer, allowing more time for rain to fall. In fact, with enough instability, we may even have strong to severe thunderstorms on our hands by Wednesday – something to keep an eye on! Due to the track of this storm and a warm-up beforehand, wintry weather is not a major concern.

Another fast-moving, strong system may bring another round of precipitation late next week as well. We are in the driest month of the year – partially because cold air simply can't hold that much moisture. Even so, cold season drought relief is possible in spurts. The longer term prognosis for the drought here and throughout much of the west is not great. The Climate Prediction Center expects the drought to persist for nearly all of Oklahoma and surrounding regions as you can see in the second map. Drought often begets drought conditions and changing that during the driest time of the year is not common.