Skiatook Man Jailed For Assault And Battery On Police 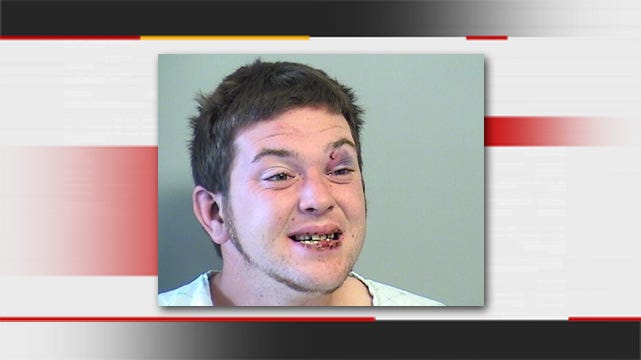 A Skiatook man is in Tulsa County Jail after police say he was caught carrying drug paraphernalia and brass knuckles. Zachary Ricker, 24, also resisted arrest and committed assault and battery on a police officer, according to arrest reports.

A Tulsa Police officer initially made contact with Ricker, who police say was "walking north on the northbound lane, not facing traffic," in the 800 block of North Maplewood in Tulsa at about 10:30 p.m. Friday.

The officer said Ricker kept putting his hands in his pockets despite orders to leave them in plain sight. The officer said he could see a pocket knife attached to the man's front pocket. Ricker turned and ran from police, according to the arrest report.

When one officer caught the young man by his shirt, Ricker took a swing at the officer, the arrest report states.

Police took Ricker down and say they found the knife, brass knuckles, a white substance, a pipe and a packet of syringes. The arrest report states Ricker struggled with police and kicked one of the officers in the knee.

Although Ricker told police the substance was methamphetamine, the report states, it actually tested negative for the drug.

Ricker was booked into Tulsa County Jail on complaints of assault and battery on a police officer, carrying a weapon, possession of an imitation controlled drug, possession of drug paraphernalia and resisting arrest.

A search of court records show Ricker has convictions in 2012 for shoplifting from Walmart and resisting arrest. He also has previous convictions for drug possession, possession of paraphernalia (2008), and petit larceny (2007).

There was a warrant out for his arrest in Osage County on a charge of uttering a forged instrument.

Skiatook Man Jailed For Assault And Battery On Police