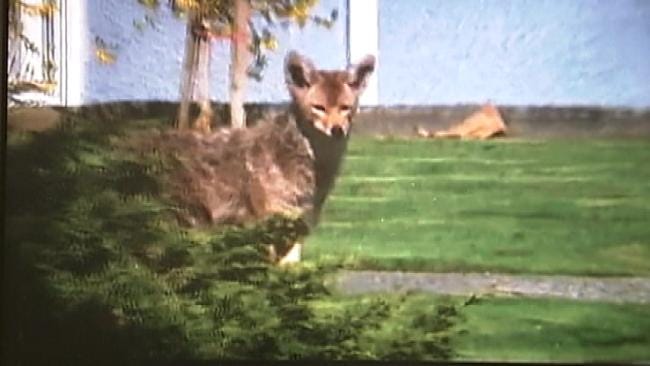 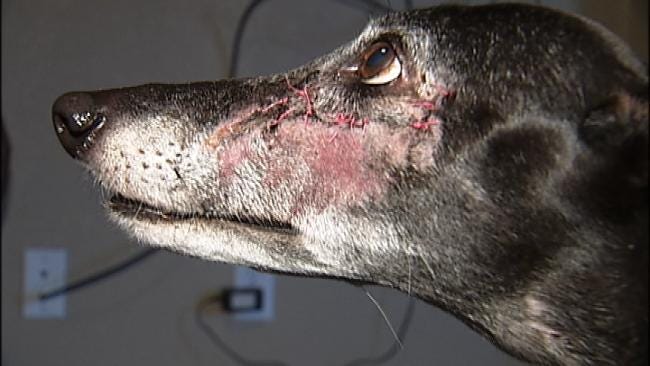 Here in Oklahoma it's not out of the ordinary to hear the high pitched calls of coyotes, especially in rural areas.

Now, more people in the more urban Tulsa area are telling us they're seeing them more often.

One Collinsville woman is warning her neighbors about the animals after her dog was attacked and almost killed in their backyard.

"I kind of followed the blood trail," said Tiffani Hicks.

Hicks said she couldn't believe what happened a few days ago, when she let her ten-year-old greyhound, Cookie, out the back door of her Collinsville home.

"We have a fenced in yard, so you don't think that something like that is going to get in your yard and attack your animals," Hicks said.

But, despite the fence, Cookie was attacked by coyotes. Within a matter of seconds a lot of damage was done.

"In 20 seconds, they had ripped the left side of her face, it was completely open," Hicks said.

Not only does she have bite marks on her face, but also puncture wounds in her neck and legs.

The bites missed a main artery by an eighth of an inch, which would have been fatal.

The veterinarian that treated Cookie says drought conditions are causing more coyotes to venture into neighborhoods looking for food and water.

Like Hicks, Judy Garmaker has seen more coyotes lately in and near her South Tulsa neighborhood near 101st and Sheridan.

"At our homeowners meeting this year, we were there to talk about budgets and things, and everybody wanted to talk about coyotes," Garmaker said.

Garmaker is the president of her homeowners association, which is urging people in the neighborhood to be aware and not leave pets unattended.

"They look like dinner to the coyotes," Garmaker said.

Hicks said she has been handing out flyers to alert her neighbors to the danger.

She said she doesn't want what happened to Cookie to happen to anyone else's pet.

The veterinarian who treated Cookie is urging pet owners to avoid feeding and watering their pets outdoors, if possible, in the future, so wild animals won't be attracted to backyards.