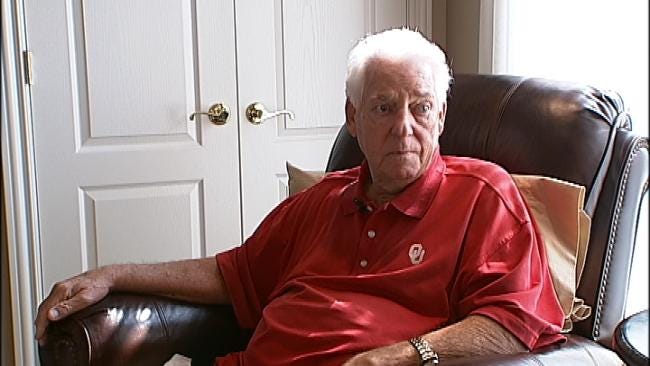 In Oklahoma's first confirmed case of West Nile Virus, the virus left a McAlester man unable to walk or see.

The patio chairs on the Daltons' back porch sit empty now. That's the place where Hal and Debbie would go each night to unwind from a long day.

It's been more than two months since a mosquito bite turned the Daltons' lives upside down.

"Now the thing that's baffling to me is: How can mosquito bite you, and then when it hits you that night, have your strength level go to zero?" Hal said.

It's a sensation that's hard for Hal to explain or understand.

At 78-years-old, Hal was always on the go, loved to be outdoors—by all accounts the picture of health.

"I golf four days a week, I worked the yard, I got a garden," Hal said. I've got a Corvette that I wash every week, you know - hand wash and polish and drive and everything - and I was very active."

It was after a weekend of yard work that Hal said he started feeling ill.

He thought he'd come down with the flu.

"I went [tried to get up] and that's as far as I got. I could not move and then I started trembling all over—I mean, just horrible," Hal said.

It took doctors eight days to diagnose Hal with the most severe form of West Nile infection.

For weeks he couldn't see and he still can't move his legs.

"It's awful, but you know, I really don't try to think of it that way, because it just kind of is what it is," Hal said.

Doctors can't say for sure if he'll ever walk again, but his wife knows better.

"He's had a positive attitude since the get-go, and if anybody can improve, he will improve," Debbie said.

Hall added, "You don't think about it until it affects you. My message would be: be aware of West Nile. It's very real."

Healthy, active adults, 50 and older, have the highest risk of becoming infected with West Nile Virus.

In Oklahoma, the majority of cases this year have been the severe neuroinvasive form.