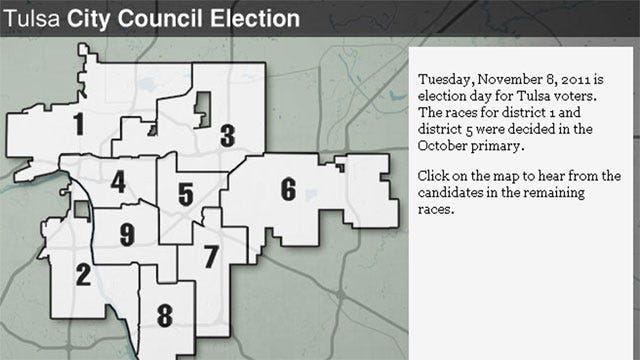 The races for city council are down to the wire. With just three days until Election Day, candidates are making the last-minute push to get your vote.

We've worked hard to make NewsOn6.com a one-stop shop for these elections. Our goal is to get rid of the spin and give you the tools you'll need at the polls.

"I'm running for city council in District 2."said Cue. "We want to get the voters out, that's the main thing."

The Republican candidate and her Democratic opponent, Phillip Oyley, said these face-to-face meetings may be the only time some voters get to ask them questions.

Getting those answers starts at NewsOn6.com. Follow the link on the homepage to our interactive map. From there, click on each city council district to read biographies of the people who want to represent us in city council.

Learn why each candidate is running, and how, if elected, they would tackle problems in their districts.

We asked the candidates the same questions to give a side-by-side comparison how each would build a better Tulsa.

"We want them to vote how they feel. Without reading the propositions, they will not know," Cue said.

"My hope is that there will be a good turnout. That's kind of the positive buzz among the candidates," Oyley said.

The information is at your fingertips to make a more informed decision at the ballot box. We'll also feature a sample ballot so those decisions won't be so overwhelming.

Click here for more information about the Tulsa County Election Board.

Election Day is Tuesday, and of course, our reporters will be in every precinct getting the latest results and analysis of the races.

Tulsans will decide whether to change our form of city government on Tuesday.

Sunday on News on Six, we sit down with some of the candidates for City Council to get their take on the ballot proposal.