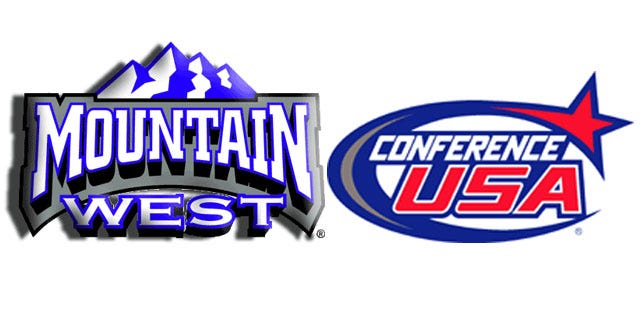 COLORADO SPRINGS, Colorado -- The Conference-USA and the Mountain West Conference announced Friday that the two conferences will be joining to create a 22-team conference agreement.

The current alignment would apply only to football for the time being, but could eventually expand to the other sports.

"As we evolved here in our conversations, we realized that college athletics is changing so fast. If we're not quick to adapt we might lose some positioning," C-USA commissioner Britton Banowsky said. "This is a structure that allows for a lot of fun, competitive possibilities."

The agreement could begin in 2012, but will definitely take effect in 2013. That decision will come in the next 90 days. The agreement could result in a BCS automatic qualification to come to the conference, but the decision didn't hinge on that possibility.

"I don't think anyone can predict the future of the BCS at this point," Banowsky said. "From my perspective, this doesn't hang on that at all; this is about a structure that can hang around for a long time."

The uncertainty with the BCS past 2014 was cited as another reason for the alignment, ensuring the stability of their schools past the new BCS TV agreements. Not only will it provide a stable environment for its current members, but will possibly allow for more than 22 teams in the future.

"All of those numbers that we know today are going to be refigured and recalculated. I don't know who's going to be in what league," MWC commissioner Craig Thompson said. "Our intention is to start with 22. One of the beauties of this structure is that we can accommodate new members."

Both conferences will retain their current television deals, as well as adding additional content for current – and possibly new – television partners.

"What we've created here is a new inventory and new programming opportunities for our partners," Banowsky said. "We're going nowhere without our current TV partners. We're going to honor those contracts, but we're talking about those standalone championship games."

Interim Big 12 commissioner Chuck Neinas was part of the planning stages of this initially, before stepping in to take the place of former Big 12 commissioner Dan Beebe. All three conferences were fully aware of the developments that have been taking place for more than a year.

"We had a realignment exercise a year ago, and on the heels of that we had some ‘What if' conversations, we were talking about an all-sports agreement," Banowsky said. "Then again this August Chuck Neinas brought up that this could be a very good idea."