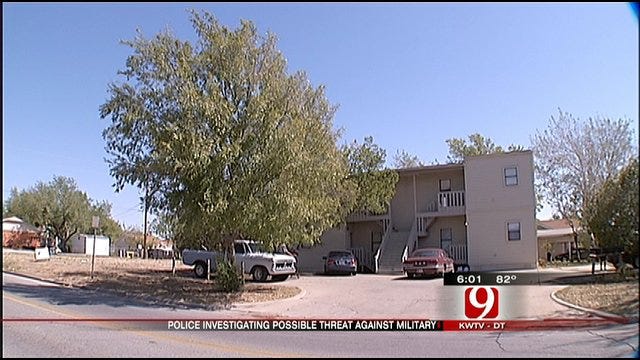 LAWTON, Oklahoma -- Police in Lawton are investigating threats made against men and women in uniform. It follows a shooting and home invasion that left six people injured.

It's been reported the people shot are gang members and are now out for revenge.

It was early last week when gunshots rang out from this Lawton apartment building, waking Carlos Nazario from his sleep.

"I think it was one o'clock, heard the shots and screaming, then saw police," Nazario said.

Neighbors said several of the victims jumped out a second story window to escape the violence.

One woman doesn't want to be identified because she's heard the shooting could have been gang related. Lawton police haven't confirmed that. But they did say the suspects are Fort Sill soldiers.

"They sign a contract to protect our country, and here they want to hurt our own people," one neighbor said.

A Fort Sill spokesperson said there have been unconfirmed reports of threats made against soldiers.

Military in our state even surrounding states are warned to stay away from Lawton, and Fort Sill soldiers are taking extra precautions in the downtown area near the mall.

"I don't know exactly the details but I was told if you're going to downtown don't wear your uniform," said Staff Sgt. Barry Key. "Because they had some gangsters who would shoot anyone in uniform."

Tinker Air Force base issued a statement warning military members to use precaution when traveling to and from Lawton, and to not wear their uniforms for extended periods.