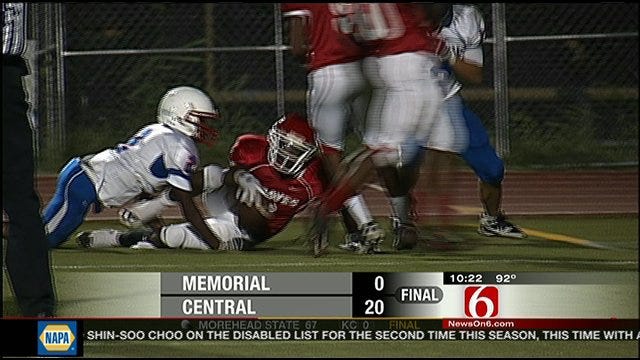 TULSA, Oklahoma – A few teams across the area started the high school football season a day early Thursday, and Tulsa Central, Claremore and Cleveland started on the right foot.

Central faced off with Tulsa Memorial, and both teams started the game slow. The Braves carried a 6-0 lead into the locker room at halftime before adding two touchdowns in the second half to cruise to an easy win.

Claremore managed to squeak past Oologah because of an ill-timed missed extra point. The Zebras missed a point after attempt of their own early in the game and trailed 7-6. But after a touchdown and successful two-point conversion, Claremore held a 14-7 lead.

Oologah connected on a 25-yard touchdown pass with less than four minutes left in the game that could have tied things up. But the Mustangs missed the ensuing extra point and could not get back on the board.

Cleveland dominated from the opening snap and had the blowout of the night. The Tigers now have won three consecutive season openers against Hominy.