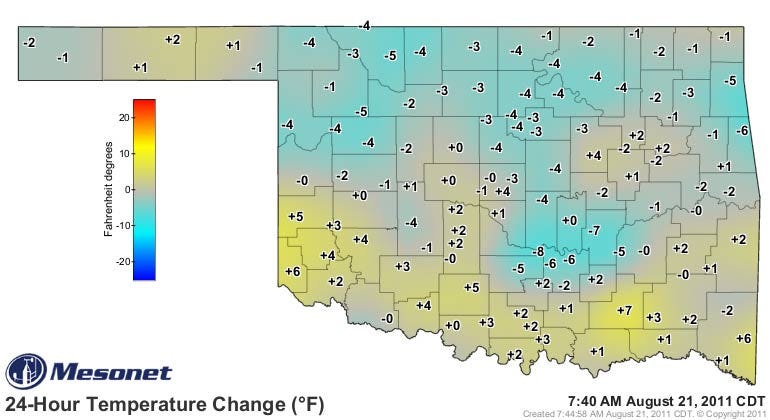 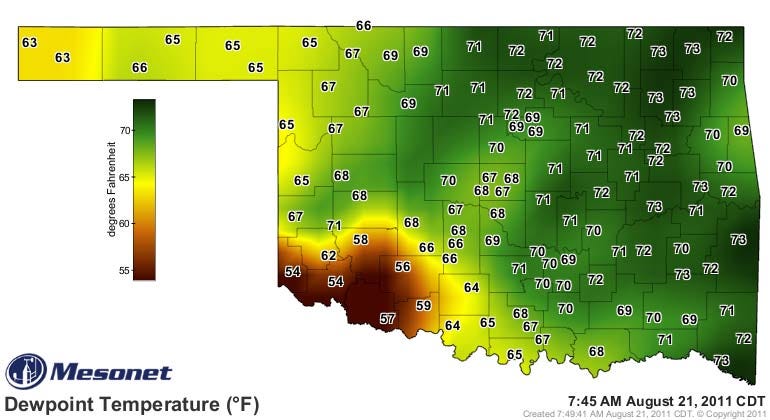 As you can see from the map on the right courtesy of the Ok Mesonet, temperatures first thing this morning are starting off a few degrees below what they were 24 hours ago for most locations. This is due to a weak boundary that has dropped to near the Red River early this morning. Showers and storms associated with this boundary have persisted south of I-40, but that activity will be waning as we go through the morning hours and there is only a 20% chance of additional afternoon/evening showers or storms area wide.

The clouds will also be thinning out, but there should still be enough residual cloud cover together with the NE surface winds to keep us below triple digits today. However, the second image on the right shows the dew point temperature first thing this morning and you can see the 70+ readings are common. These high dew points will be persistent at least through Monday and perhaps Tuesday as well. This means the humidity levels will remain uncomfortably high throughout each of the next few days with a minimum relative humidity only dropping into the 40% range during the heat of the day. In other words, although it will not be quite so hot with temperatures on Monday also below triple digits, the humidity will still make it feel like it is at or above 100 both today and tomorrow.

Triple digit heat or close to it will then prevail for Wed and perhaps into Thu before another weak boundary arrives. The timing on that next system keeps changing and it also keeps getting weaker. Even so, temperatures should be trending down somewhat going into the coming weekend, although still warmer than normal for this time of year. Also, it appears our rain chances will be in the slim to none category for later in the week and into the coming weekend.

Speaking of the coming weekend, if you have travel plans that involve the east coast, I strongly advise keeping a close eye on the weather. What will likely be a strong hurricane Irene is expected to be impacting Florida and then up the East Coast later this week and into the coming weekend. All current guidance suggests it will not be impacting our weather directly.

So, the bottom line for most of us is more hot, humid weather with just a few cooling showers and storms to bring some of us localized relief.