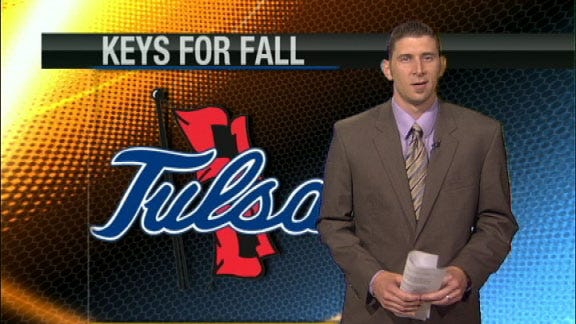 After dropping two of the first three C-USA games in 2010, Tulsa won the final five to finish just percentage points out of the top spot in the league. For the team to jump to the top of the heap in 2011, there are three big keys heading into this week's first official team practices:

Shavodrick Beaver will not be with the Golden Hurricane after the team announced that the junior would be transferring closer to his home in Texas. That leaves Malachi Blankenship and Stephen Rouse as the only backups after Kalen Henderson was suspended during spring drills.

G.J. Kinne threw 185 incomplete passes last season, but many of those were not his fault. Tulsa receivers dropped multiple passes seemingly in each game. The most noticeable night of blunders came in a 3-point loss on the road to SMU. The Golden Hurricane dropped three sure-fire touchdowns against the Mustangs and a few other catchable balls over the middle that cost them precious field position.

Blankenship's first recruiting class is soaking wet with talent at each position. Many incoming freshman will see time on the field. Guys like Holland Hall's Kwame Sexton and Sallisaw's Garrett Glaad will be called upon to make immediate impacts; much like Marco Nelson did in his first season at the collegiate level.

Those are the bullet points, but the team will also have to gel with the new coaching staff and adjust to the new 4-3 defensive scheme. Tulsa's first practice is Thursday morning and the annual team media day will follow that workout. If you have a question for a player or coach, email it to News on 6 reporter Bobby Lewis or tweet him @Bobby_L.