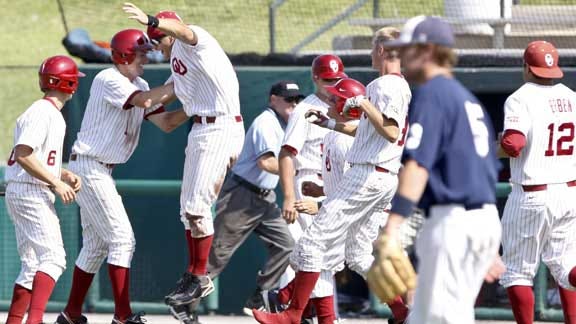 MORRIS, Okla. --The last time the Morris Eagle community has known a legend was when a kid from Henryetta named Troy Aikman was leading the Hens. Now, they might have one of their own make it big, this time as pitcher. Hayden Sharp was selected with the 569th pick in the 18th round of the Major League Baseball draft Tuesday night, by the New York Yankees.

Last year he completed 86 of 212 passes for 1,431 yards, fourteen touchdowns, including the decisive 54 yarder in the Eagles’ 6-0 Homecoming win over the Knights, and thirteen interceptions. He also increased his punting skills with 53 total punts for 2,069 yards giving him a 39.0 average.

Sharp was named to the Oklahoma Coaches Association Class 2A East team, and was an honorable mention for the Tulsa World’s All-State team. His Morris squads made the playoffs in three of his four high school years, they compiled a record of 28-18.

He made the winning layup in Morris’ 48-47 victory over Henryetta on Jan. 14, in his last two contests against the arch-rival Knights he dropped in 16 points, three assists, two blocks, a steal, and 18 rebounds.

Sharp announced the news on his Facebook page Tuesday night, saying “Well, everyone....LOOKS LIKE I’M GONNA BE A NEW YORK YANKEE!!!!!!!” After he posted it, his page was deluged with well deserved congratulations.

On the national level, Owasso’s Dylan Bundy and Broken Arrow’s Archie Bradley were both top 10 picks, picked by the Baltimore Orioles and Arizona Diamondbacks, respectively. Overall, 32 players with Oklahoma ties were selected by 17 teams.