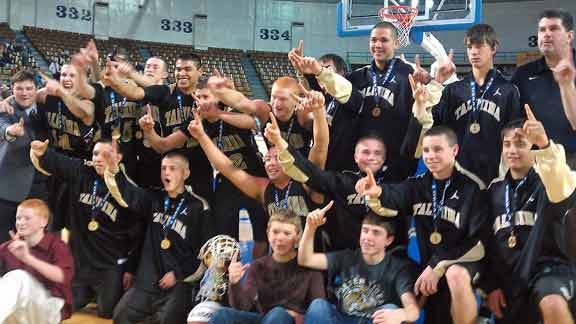 OKLAHOMA CITY -- After coming up short in overtime a year ago, the No. 2 Talihina Tigers knocked off the Preston Pirates 42-27 Saturday to claim the Class 2A Gold Ball, the first in boy’s basketball in school history.

It was a wild second half, and the Tigers had to weather a third quarter storm from the Pirates, who knocked off both Millwood and Pawnee to reach the Gold Ball game.

Talihina led 22-19 to start the second half; a lead that shrunk from 10 points after Preston closed the half on a 10-2 run. That momentum carried into the second half, and the Pirates opened the third quarter with six unanswered points to take a 25-22 lead three minutes in.

But that’s when the points dried up and the bottom fell out for Preston.

The Pirates missed 13 shots in the game’s final 11 minutes, their only points coming on a pair of free throws from senior Kalian Watkins.

Talihina, on the other hand, seemed unable to miss in the game’s closing minutes.

The Tigers finished 2:40 of the contest with 11 unanswered points, for each coming from senior stars Jordan EagleRoad and Taggert Lockhart.

Lockhart led all scorers with 17 points and EagleRoad added 10, including an emphatic dunk that sparked the late run from Talihina.

Williams set the pace for the Pirates with 13, six coming from the charity stripe, with junior Chance LeBlanc adding five.

The Tigers claimed the school’s first Gold Ball in any sport since claiming a football title in 1966.