Bridge Creek Shakes Tecumseh to Advance to 4A Championship 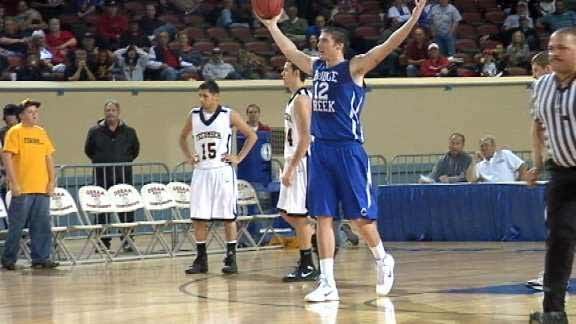 OKLAHOMA CITY— Semifinal Friday got off to a breakfast-time battle in the first game of the day as the No. 5 ranked Bridge Creek Bobcats defeated No. 4 Tecumseh 39-36.

The first half went back and forth but the Bobcats held a slight 12-9 advantage after the first quarter of play.

Ryan Spangler was the scoring leader for Bridge Creek from the beginning, totaling seven points in the first quarter alone.

The second quarter saw Bridge Creek go up by as many as seven points, but Tecumseh senior Francisco Hukill hit back-to-back 3-pointers to pull the Savages within three.

At intermission, Bridge Creek was up 25-19 and Spangler led the way with 15 points while Hukill totaled 10 points for Tecumseh.

The struggle for Tecumseh in the first was its multitude of missed wide open 3-pointers as well as second chance points they failed to convert.

Bridge Creek opened up the second half of play with a slicing layup to the basket by senior Josh Pershica to go up 27-19.

The Bobcats led by as many as 10 points in the third quarter but Tecumseh senior Kevin Hill ignited to keep the savages in the game.

Hill scored 10 straight points including two 3-pointers to tie the game at 31-31 by the end of the third frame.

In the fourth, things got feisty.

Tecumseh’s Kyle Fowler came out to score an immediate three and after the Bobcats turned the ball over on two straight possessions there were five minutes left in the game and the Savages were on top 34-31.

Jacob Bolich tied the game back up off a three pointer and things got heated.

Players clashed at mid-court twice, exchanging words and bumping chests before teammates pushed them to their respective benches.

After Julio’s field goal, Bridge Creek held the ball until the clock showed only :26 left in the game before calling a timeout to talk about its final possession.

Out of the huddle came the Bobcats and to his surprise senior Caden Locke was wide open on the right wing and sank a 3-pointer to go up 39-36 with 13.5 seconds remaining.

Tecumseh’s last second shot attempt fell short and Bridge Creek came out with the 39-36 win to advance to the 4A state championship game.

Coach Matt Thorton and the Savages finish the season at 24-3. Hill finished with 14 points and was helped by Hukill, who scored 10.

Spangler finished with 21 points for the Bobcats while Bolich tallied seven.

Bridge Creek will play in the winner for the 4A state title on Saturday at 5:45 p.m. inside the Big House at the State Fair Arena.

For more check out the CoachesAid.com 4A Semifinal Recap.

Bridge Creek Shakes Tecumseh to Advance to 4A Championship