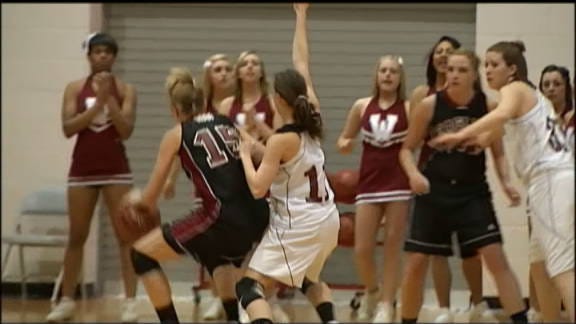 OKLAHOMA CITY – The Weatherford Eagles were able to hold of the Wagoner Lady Bulldogs for a 64-49 victory and advance in the state tournament.

The Lady Eagles jumped out to an early 5-0 lead in the first minute of play, but the Lady Bulldogs were hot on their tracks.

Chandler Roof got things started for the Lady Eagles, hitting a jump shot with two defenders on her, and drawing a foul on a layup on the next possession. She made both of her free throws to bring the score to 12-6 in Weatherford’s favor.

Wagoner’s size in Laura Reel proved valuable under the basket, as she was able to crash the boards and draw fouls, but Weatherford’s speed and ability to capitalize off fast breaks created a fast pace the Lady Bulldogs struggled to keep up with.

The Lady Eagles led by 11 going in to the second quarter, but a couple of Weatherford turnovers followed by Wagoner fast breaks put the Lady Bulldogs back in the game.

Wagoner’s Landyn Fulps drained a three to bring the score to 28-23 with 2:30 left before halftime. Two free throws off a foul in the next possession brought the score to 28-25 in Weatherford’s favor.

With just a minute left on the clock, it seemed the Lady Bulldogs were gaining momentum, as Sherri Lang drained a three, closing the margin to only two points. The Weatherford Lady Eagles led 32-29 as the two teams headed into the locker rooms.

That momentum seemed to shift in the third quarter, when Weatherford again pulled ahead. The Lady Eagles’ Pam Whedbee hit a 3 with just under four minutes in the third, bringing the score to 44-32.

The fourth quarter was physical, but Weatherford managed to hold off Wagoner, who threatened the Lady Eagles every chance they got.

The Weatherford Eagles improve to 25-1 on the season and will continue on their track to the Gold Ball.