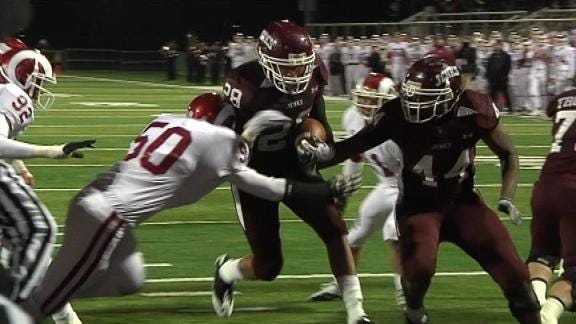 BROKEN ARROW, Oklahoma – The Owasso Rams were looking to avenge a regular season loss to theJenks Trojans on Friday in the 6A state semifinals. The Rams scored more points than they did back in September, but so did the Trojans. Jenks advances to the 6A state championship game with a 75-28 win at Broken Arrow Memorial Stadium.

With about 5 minutes left in the first half, the Trojans held a relatively slim 21-7 advantage. However, a couple key turnovers permanently turned the momentum the Trojans’ way. On a 4th-and-6 for Owasso, Trojan Chris Reilly forced a fumbled that Jenks’ offense later converted into a touchdown. Later, deep in their own territory with less than ten seconds on the clock, Owasso fumbled again. Instead of attempting a field goal, the Trojans opted to go for the touchdown with 1 second remaining on the first half clock. They would not get it, and the score remained 28-7 going into the half.

The second half featured far more scoring. Jenks’ defense would force several more interceptions, including two that were returned for touchdowns. The offense added a few touchdowns of their own, and by the time the dust settled, Jenks had outscored Owasso 47-21 in the final two quarters.

With the loss tonight, the Owasso Rams finish the season at 8-5. The Jenks Trojans are now 13-0, and will - again - clash withUnion for the 6A gold ball.