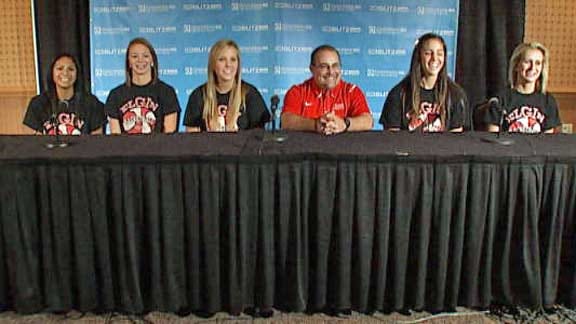 OKLAHOMA CITY -- The Owls went 16-11 on the season last year, but will have to rely on a lot of new faces after returning only two starters from the 2009-10 roster.

The team will look to run multiple defenses and focus on having fun while winning games. Coach Mahoney will be all business when they face tough teams, including Clinton, Cashion, Elk City and Woodward.

“Everyone you play, you have to bring your A game,” Mahoney said. “We’ve got a lot of girls that have played a lot of basketball.”

The girls also have expectations of themselves. They have yet to win a state title and it’s goal the girls can practically taste.

“I would like to get to state and we haven’t been there in a while,” the Owls’ lone senior Morgan Dye said.

A tough schedule, a new coach and only one senior?that may spell a recipe of disaster for most teams, but for the Owls it’s a chance to enjoy the game they all love and make the playoffs for the second year running.