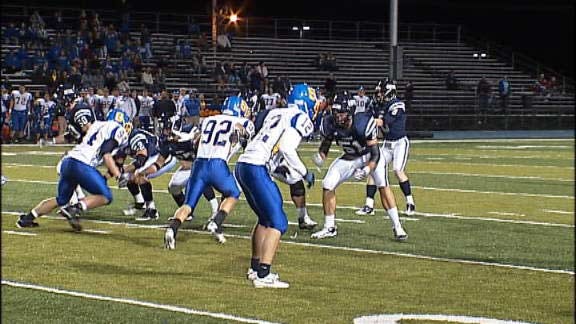 BARTLESVILLE, Oklahoma – The Bartlesville Bruins recovered from a heartbreaking loss and had another explosive offensive performance in a 56-33 victory over the Stillwater Pioneers Friday.

The Bruins (6-3, 4-2) were coming off a one-point loss to Union in which they allowed a huge late comeback, but bounced back to score more than 40 points again. They have now reached that mark in every game they have won this season.

Bartlesville is guaranteed a spot in the playoffs, but its seed is still up in the air. The Bruins could finish second, third or fourth in their district depending on results next week.

The Bruins will face Enid (6-3, 4-2), and both teams are part of a three-way tie with Owasso for second place in the district. A loss will guarantee that Bartlesville finishes fourth in the district, while a win coupled with an Owasso loss will give the Bruins a second-place finish.

Stillwater (1-8, 1-5) will finish its year next week against Union.