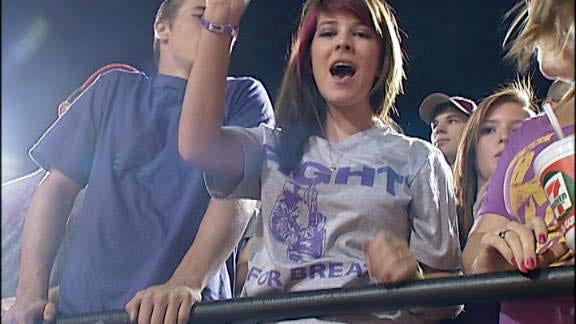 OKLAHOMA CITY -- Football players play for pride and victories for their teams each Friday night, but a Putnam City North student found a way to utilize that same passion to bring awareness to a special cause.

“I really didn’t know anything about Cystic Fibrosis before this,” Benson said.

Cystic Fibrosis is diagnosed about 1,000 times each year, mostly striking children less than two years old. It’s an inherited disease which clogs the lungs, leading to life-threatening respiratory infections along with digestive problems, prohibiting a person from absorbing nutrients through food.

Benson found a link on the group’s wall, telling the story of seven-year-old Capri, who battles the disease every day. Capri takes more than 50 pills a day, two breathing treatments and has recently had to move away from her friends and family to participate in a trial treatment.

“I finally went and read it and it just really tugged at my heart,” Benson said.

Learn more about Capri’s story, including what sacrifices her older brother, Cooper, is willing to make to save his sister’s life.

Benson knew she could use Friday night football as a platform. She knew her fellow students would help her spread the Capri’s story, and the stories of so many others. She set up a table at the game, selling T-shirts and wristbands like the ones the players wore during the Panthers’ game against Lawton Eisenhower.

Benson and her friends set up a table at the game, selling T-shirts and wristbands like the ones the players wore during the game.

“Our student body is really like a big family,” Benson said. “When we’re in something, we’re in it together and everyone participates. It’s really been awesome to see the outcome."