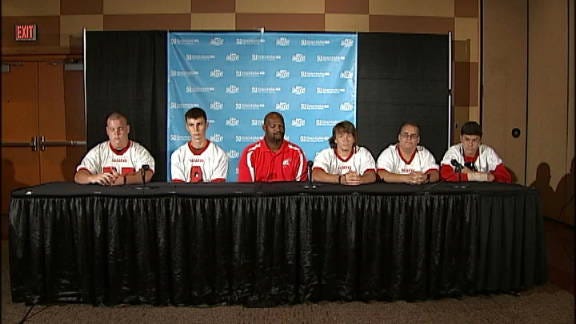 OKLAHOMA CITY – The Sasakwa Vikings are making the jump to class B after a successful 8-3 campaign in Class C last year.

Quarterback Mike O’Guinn will be moving into the full-time quarterback spot after proving himself as a multiple-threat athlete on offense last year. He rushed for 542 yards and six touchdowns last year.

He will have a good receiving target in wide receiver target John Harjo, who had 495 yards and 10 touchdowns a year ago.

The Vikings are not going to have an easy path to start their Class B campaign, taking on solid opponents in Allen and Alex the first two weeks.

Sasakwa coach Johnie Loggins said he doesn’t mind the stiff competition because it gives his team a chance to make a statement right off the bat.

“We performed pretty decent in that first game. I think we got a shot to maybe change some of the guys in Class B’s mind if we can compete with Allen a little bit,” he said.

Loggins said teams moving up a class often have to earn their respect, but said his players have no problem working their way up.

“I like being the underdog,” he said. “They like it. I think it kind of puts a chip on their shoulder to come out and perform a little better.”

For more on Sasakwa, visit CoachesAid.com or pick up a copy of the 2010 edition of the Oklahoma High School Blitz, powered by Coaches Aid and Oklahoma Sports.