Dean Blevins Behind the Scenes at Oklahoma Sports Media Day 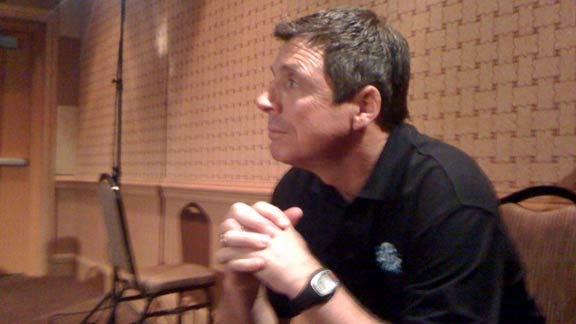 Dozens of KWTV/Oklahoma Sports/Coaches Aid personnel were extremely organized. I was there when the first teams hit the interview rooms at 9 AM. No dilly-dally. Yes, smiles and handshakes and general “good luck and thanks for coming” small-talk But a jam-packed schedule was adhered to.

-Most all the players were being interviewed in this type of forum for the first time. The first session I listened to had a couple of nervous players hearing twenty second questions and gave one word answers: “yes” or “no.” But these kids are coachable. After that, I talked with most of the coaches and players and told them the best way to answer questions, to enjoy it and avoid the dreaded one-word answer. I told them that you don’t see too many sound bites getting on the air when a guy says, “yes.” The rest of the sessions I attended had several players who were articulate and comfortable.

-The agenda: mug shot, team interviews with specific questions for the coach and all his players (Oklahoma Sports cameras and a separate Oklahoma Sports TV camera for on-air taped all one-hundred plus teams), some one-on-one interviews, website stories that are going up right now on Oklahoma Sports written by our website producers who were in all four interview rooms simultaneously. Of course there is no way to put a value for the school and for us when we meet the coach and he introduces us to the players. Nothing beats eye to eye contact and listening to what they think.

-I was stuck by the number of schools getting new facilities—fields, stadiums, weight rooms. As the overall economy goes south faster than Tiger’s reputation, some of these high school teams are prospering. I guess it proves the president of a bank is much more likely go to his wallet if his son is the right guard in need of a set of biceps than he is to whip out the geeter to help a guy they don’t know run for political office.

-It was easy to see which schools had an off-season conditioning program and those that didn’t. Those who had workout equipment and those who didn’t. Some looked chiseled while others looked like me.

-Each team—head coach and between two and seven players—was interviewed for fifteen minutes then it was on to the next station. When I left around 1PM there had been some 57 teams run the gauntlet when I left Media Day and headed to the office.

-Some teams felt the travel time and distance outweighed the benefits. Wrong. Perhaps next year it can become a two-day event with one in OKC and another in Tulsa. Or crazy me, perhaps it’ll be one big festival in Stroud, America—better known as The Midway Point of Turner Turnpike.

-Smashing success. The one hundred plus teams that participated is three times the number from a year ago. I’ll go out on a limb and predict next year there will be 250 teams. The combination of the resources of KWTV/Oklahoma Sports and Coaches Aid and the positive impact it will make for the teams will be but two of the reasons.

-One player told me that he and his buddies get on the website to see and hear from opponents.

-If your coach didn’t load up your high school heroes and take part in this year’s event, let them know that you are disappointed and that you want them to do so next season. How can you beat free publicity?

-As I was watching all this take place, flashed back to when at Norman High, if you were really good, a writer might show up after practice to ask you about your sprained ankle. If you were really lucky, you’d open up the Saturday morning Daily Oklahoman or Norman Transcript and see your picture. Now, seven players walk away with all this from one entity.


In all, a win-win-win. A win for the schools. A win for Oklahoma Sports and Coaches Aid. And of course a win to you, our consumer.

See you Sunday no The Blitz?.db

Dean Blevins Behind the Scenes at Oklahoma Sports Media Day