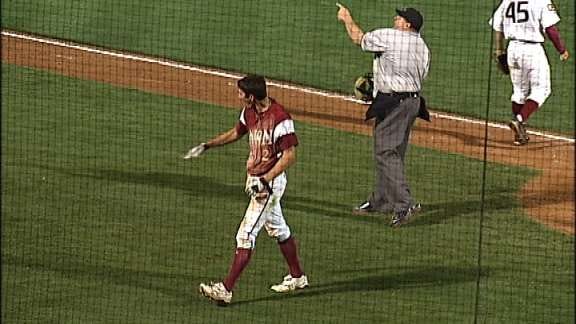 TULSA, Oklahoma - They were down three runs with perhaps just three outs left in their season.

Insurmountable? No. Tough? Yes, even for Owasso.

"Both teams just kept fighting out of jams and coming back. It was just like a heavyweight fight," said Owasso Baseball coach Larry Turner.

The Rams got the three runs they needed to take an already epic game into extra innings.

Jacob Rice led off the bottom of the eighth inning with a routine grounder, that was overthrown to first base. Rice slid into third and with no outs, the Redskins could feel the title tilting their way.

After a pair of walks loaded the bases, the sac fly came and Rice headed home.

"I'm telling him he better get there," Newkirk said.

"Turns out I really didn't get the go sign,” Rice said. "I thought I was safe. I got a little emotional and threw my helmet and got tossed."

"I thought after we got out of the bases loaded jam with no outs, it was just kind of destined," Turner said.

It was for Union. They loaded up the bases again in the 9th. Owasso walked in the game-winning run, an anti-climactic ending to an otherwise unbelievable game.

"Bottom of the ninth, two outs, bases loaded," said Union right fielder Wade Ambrose. “It usually doesn't end up a walk, but we'll take it how we can get it man."