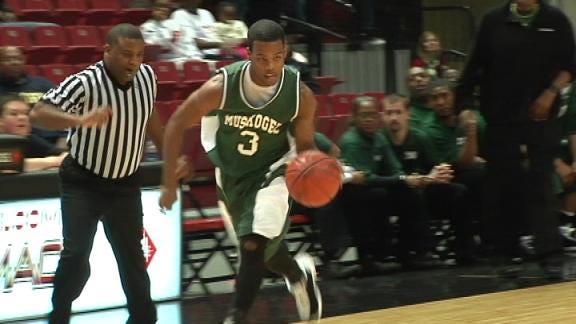 TULSA, Oklahoma – The Muskogee Roughers sent the Union seniors home with a loss on Senior Night after a 49-36 come-from-behind win over the Redskins. One of the state’s premier big men, Oren Faulk, scored 10 points in the win.

Union led the Roughers by three at halftime but Muskogee opened the second half hot on offense. Adrion Webber and Jerome Beasley led the charge, pushing the Muskogee lead to ten at one point, before finishing the quarter with a 35-29 lead. The Redskins did a nice job keeping Faulk and Beasley from scoring easy baskets inside, but the Roughers were able to make long jump shots in the third quarter.

Union’s Qua Carter did his best to jumpstart the offense but was limited by the Muskogee full court press. Union didn’t try to get to the basket much against Muskogee’s much bigger frontcourt. Stephon Weaver and J.C. Hartzler were forced to launch long three pointers after getting behind by double-digits.

Muskogee stretched its lead to 41-31 midway through the fourth quarter. The Roughers sealed the win with late free throws. Union scored just seven points in the final quarter.

Carter led Union with 13 points, and Weaver added 11. The Redskins have now lost two of their last three games. They will begin postseason play against Ponca City next Friday, February 26th.

Webber scored ten of his game-high 16 points in the third quarter. Muskogee outscored Union 31-15 in the second half. They will play Bartlesville next week.