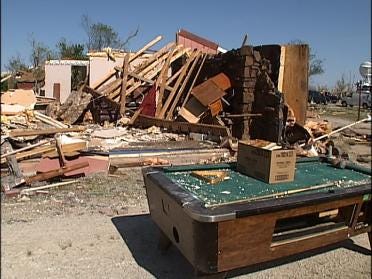 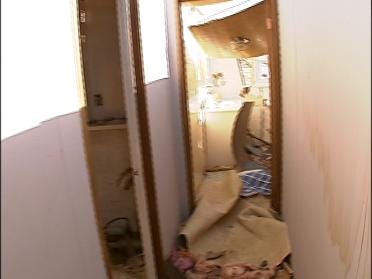 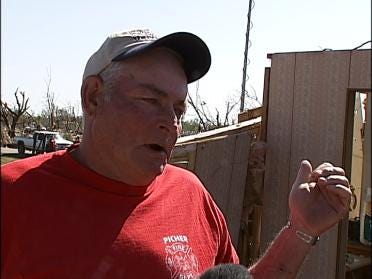 So many people in Picher have a story to tell, including the town's former mayor.  News On 6 anchor Latoya Silmon has his first-hand account.

It may be hard to imagine facing a tornado, but Sam Freeman saw the massive monster moving toward him.  What he and his wife did next probably saved their lives.

What once was home is now a pile of debris, but unlike their house Sam Freeman and his wife survived.  He credits quick thinking.

"I heard the Commerce Fire Department west of here say this was on the ground five miles west of town and coming straight up at about 40 miles an hour," said former Picher Mayor Sam Freeman.

The proof was just outside the former mayor's back porch.  Time was running out for him and his disabled wife.

"I just barely had enough time to get my wife.  She was right here in this bedroom.  We went around that hall into the laundry room.  We weren't there maybe one minute or two minutes when our house left us," said former Picher Mayor Sam Freeman.

The improvised safe room is one of the few things that are still standing. You can also make out what use to be the kitchen.  Their pool table has now found a home outside.  It is also a stark reminder of what's caused many in Picher so much pain.

And then, there are the memories of the storm.

"You just heard like a real dull roar and within a minute it sounded like a freight train running over your head, and then all you can hear is the wood crunching, debris flying and slamming probably about 15 seconds of that.  Then, everything stopped," said former Picher Mayor Sam Freeman.

The tornado tore through in minutes, but its impact will last forever.  Freeman chooses to find comfort in what the storm didn't wipe out.

"We found some pictures that were in that bedroom where the floor is gone three blocks east of here against that chat pile," said former Picher Mayor Sam Freeman.

Finds like that are small victories against a mighty force.  For now, that's what gets some people through the day.

Before the tornado, Sam Freeman and his wife were going to leave Picher soon because of the federal buyout.  In fact, they had already started packing up their things and Freeman resigned as mayor, a position he held since 1998.