MIYAZAKI, Japan (AP) _ Tiger Woods shot a 5-under-par 65 Friday to take one-stroke lead into the second half of the Dunlop Phoenix golf tournament.

The two-time defending champion, used an early eagle at Phoenix Country Club to post a two-round 8-under 132 and move past Ireland's Padraig Harrington (66).

``I'm very happy to shoot that and to have that be the lead is awfully nice,'' Woods said.

Woods, who took a five-week layoff before last week's HSBC Champions at Shanghai, is looking to join Japan's Jumbo Ozaki (1994-96) as the only three-time winners in the $1.69 million Dunlop Phoenix.

``Hitting the ball as well as I did today, it was a nice positive sign going into, potentially, a very difficult weekend,'' Woods said, referring to the forecast for stormy weather.

``I hit a lot of good shots,'' he added. ``I just need to clean up a bit and I should be all right. You can't miss it around this course and expect to win. These greens are too difficult and this year with the rough being up, you've really got to hit good tee shots as well.''

While Woods is in a good position to defend his title, some quality players are close behind, including Harrington, whose solid round included a lone bogey at the par-3 11th, where his 7-iron found the pond guarding the green.

Harrington said he looked forward to playing the third round with Woods.

Englishman Ian Poulter, who finished tied for second behind Woods at the American Express Championship seven weeks ago, continued his recent good form with a 64 to sit two stokes off the lead in third place. Three of Poulter's seven birdies were tap-ins, and two others were from inside 10 feet.

``I hit a lot of fairways, a lot of greens, had an awful lot of chances,'' Poulter said. ``I'm in form, just playing the way I've played all year.''

As well as Poulter played, it wasn't enough to catch Woods, who made his eagle at the par-5 fourth, where he chipped in from 25 feet.

``To be honest, I hit it too hard,'' Woods said. ``If I'd missed, it would have gone about six feet by, but it caught the right edge and it went in.

``Conditions were a little easier than yesterday and you could see some of the guys really went low today. You had to shoot something in the mid 60s in order to have a chance of getting in that final group.''

It wasn't all smooth sailing, though. At the par-4 17th, he pushed his drive up against a temporary fence. Though he was granted a free drop, trees blocked his route to the green, so he chipped out sideways and settled for a bogey rather than risk a try for a miracle shot.

Overnight leader Shingo Katayama of Japan fell three shots back after a 70, while Englishman Justin Rose carded the day's best score, a 63, to move within four of the lead. 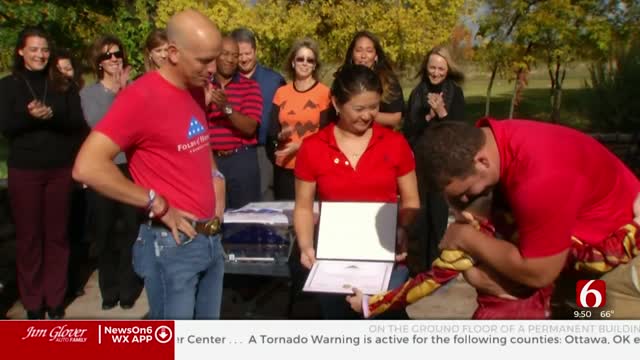 Folds Of Honor Is Proud To Support Athletes, Service Members During Tough Times

News On 6 Folds of Honor is proud of their support through the coronavirus pandemic.
View More Stories

Folds Of Honor Is Proud To Support Athletes, Service Members During Tough Times

News On 6 Folds of Honor is proud of their support through the coronavirus pandemic.
View More Stories