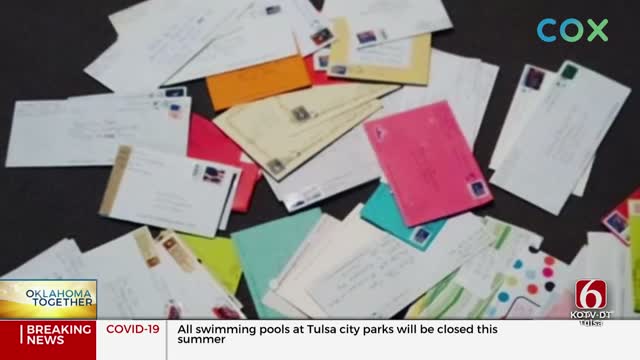 Two cats at the Philbrook Museum of Art are getting attention from people all over the world.

Many families at home are now pen-pals with Cleo and Perilla, the Philbrook Garden Cats.

Walk through the 25-acres of the Philbrook Gardens and you will find blooming flowers and peaceful coy ponds. If you’re lucky you might also spot the guards of the garden, Cleo and Perilla.

“They live here. They have been unaffected by the quarantine. They are still having a great time,” said Jeff Martin with Philbrook Museum of Art.

Cleo and Perilla don’t know it but people all over the world are trying to talk to them. The Philbrook started a garden cat pen-pal program.

They created it for fun, to do something positive, unique and entertaining during a tough time for many people. They are now getting letters from all over the world. Some parents say they are using the program to teach their kids grammar while they are stuck at home, but the letters aren’t just coming from kids.

Anyone who writes the cats, get a response. A Philbrook task force of people with great handwriting respond to every letter on personalized Cleo and Perilla stationary.

“What a perfect time for people while they are trapped at home to write a letter, an actually physical letter,” said Martin.

Anyone that would like to write a letter can send them directly to the museum. The Philbrook says they will keep the program going as long as letters keep coming.