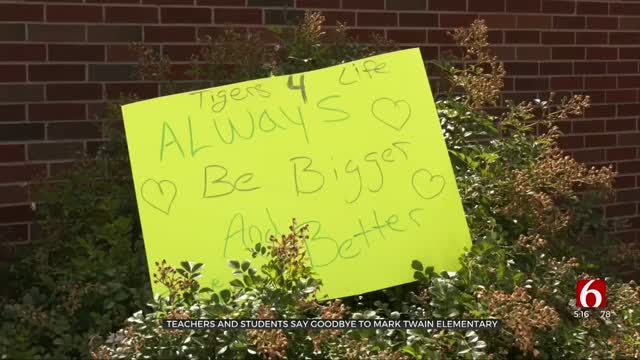 TULSA, Okla. - Teachers and staff at Tulsa’s Mark Twain Elementary held a drive-thru parade Wednesday to celebrate the end of the school year.

There was lots of excitement for summer break, but there was also some sadness because it was the last time students and their teachers will spend their day at Mark Twain Elementary.

"We're just all out here, saying goodbye to our kids wishing them a good summer since we won't see them again," said third-grade teacher Ms. Castillo.

She and several other teachers waved and held signs celebrating the student’s accomplishments. They would normally have held a picnic and carnival to kick off summer, but because of COVID-19, they had to improvise.

"This is not the way that we had hoped to end our school year, but you know, it is what it is," said Castillo.

On a day meant for celebration, there was also a tinge of sadness. Principal Angie Teas said this is more than just a regular summer goodbye.

"This is kind of our culminating goodbye for the summer, but for us, it's also goodbye, because we're closing," Teas said.

Tulsa Public Schools voted earlier this year to consolidate Mark Twain Elementary with Wayman Tisdale in the fall. Principal Teas said it's sad to see the end of a school that’s been part of the community for decades.

Although school at Mark Twain is coming to an end, Teas said its legacy will live on through the teachers, parents, and students.

"We have a great community as teachers we back each other up, and yeah, it’s a good community here," said Ms. Castillo.