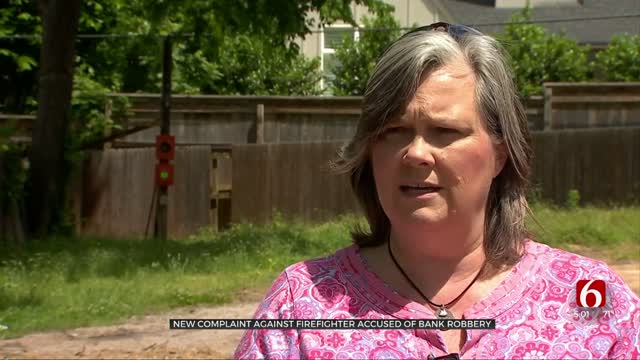 TULSA, Okla. - A Tulsa woman claims she is out nearly $100,000 after she hired Tulsa Fire Captain Jerry Brown to remodel her house in 2019.

Brown was arrested after being accused of robbing two banks of more than $300,000 and using stolen money to pay off debts from his contracting business.

Tammy Shank said she had already paid Jerry Brown $75,000 to remodel her house.

Then, she started getting calls from sub-contractors saying they were never paid.

Today, she has an empty lot with just dirt.

Shank said she and her family feel tricked, betrayed and victimized.

"Everybody said he was a good guy, but as the process went along, no he wasn't,” said Shank.

Shank said she hired Jerry Brown in 2019 to build an addition on her house.

Shank said Brown told them the house would be done at the beginning of July, but it wasn't so they had to live in a hotel for six weeks.

She said ten days after it was supposed to be done, her house burned down.

"I told Jerry that I wasn't going to use him to rebuild, our relationship was done. All of a sudden I started getting calls from sub-contractors that Jerry had not paid them,” said Shank.

Shank said she had already paid Brown $75,000 of the total $96,000, but then had four subcontractors call her saying they had never been paid.

She said one of the contractors put a lien on her house, so she had to pay another $15,000 to get it removed.

Shank said she spent months texting Brown asking when he would pay the sub-contractors.

"His answer was Tammy the insurance company is going to make you whole again. Just pay this and make it go away. I told him that I am not paying it because I've paid you,” said Shank.

Shank said she doesn't know what Brown did with the money she paid him.

She said all of the emotions came back to her and her family when she saw Brown's name in the news this week.

"I opened it and I went woah. I was speechless. I couldn’t shut my mouth. I felt duped and I fell for it. Victimized is the perfect word,” said Shank.

Tammy Shank said she has filed a police report. It's a commitment to the Oklahoma Standard, holding true one year later.