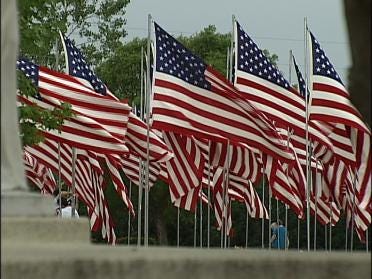 President Trump on Thursday announced he's ordering flags at all federal buildings and national monuments to fly at half-staff over the next three days in honor of the tens of thousands of Americans who have died from COVID-19.

Earlier Thursday, House Speaker Nancy Pelosi and Senate Minority Leader Chuck Schumer wrote to the president asking him to lower the flags to half-staff when deaths surpass 100,000. The death toll is nearly at 95,000 as of Thursday night, per Johns Hopkins University.

"I will be lowering the flags on all Federal Buildings and National Monuments to half-staff over the next three days in memory of the Americans we have lost to the CoronaVirus ... On Monday, the flags will be at half-staff in honor of the men and women in our Military who have made the Ultimate Sacrifice for our Nation," the president tweeted.

As the public health crisis continues without a clear end in sight, the president has also been focused on the push to reopen states' economies. An additional 2.6 million Americans filed jobless claims in the last week, bringing the nine-week total to a devastating 38.6 million Americans.

﻿The president has at times struggled to prioritize verbalizing sympathy for coronavirus victims, and a New York Times analysis in late April found the president's efforts to display empathy or appeal to national unity, about 160 times, amounted to about a quarter of the times he complimented either himself or a top member of his team.

But he has also sometimes voiced the stories of people he knew who either fell ill or died from the virus. When Stanley Chera, a friend and donor, died from the virus, the president expressed his "deepest sympathies" to Chera's family.

"Stanley was charitable, kind, and a wonderful friend," the president tweeted last month. "He will be truly missed!