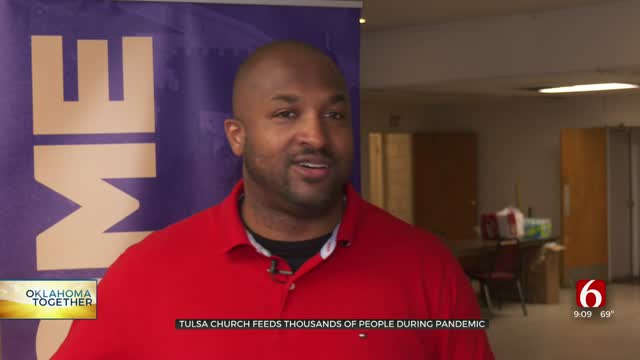 TULSA, Okla. - A downtown Tulsa church is taking its ministry to a new level to serve thousands of meals to people in need.

News On 6 talked to the Vernon A.M.E Church pastor about how they've provided free meals every day during the pandemic, and how so many helpers have made it a possibility.

The church's goal started small three months ago by just serving a few dozen meals. That number now tops 25,000, and they have no plans of stopping anytime soon.

Doors are open at the Vernon A.M.E Church. Church treasurer Fred Freeman is working hard, loading up boxes of meals and handing them off to anyone who needs one at the front door--no questions asked.

"Every day, we try to feed somebody something," Freeman said.

Pastor Robert Turner said the church has been able to serve at least one meal every single day since March 18, but he said it was never his plan.

"God spoke to me on that Monday afternoon, and said to feed people," Turner said.

They've served anyone and everyone: Those who have lost jobs from COVID-19, the homeless, the elderly, with the help of local restaurants like Lefty's on Greenwood, donors and volunteers.

"They show up every day and most of the people are seniors," Freeman said.

Freeman has even started cooking his own meals on Fridays.

They've started giving away donated clothes and shoes too.

Pastor Turner said Tulsans have shown their strength, and they're not stopping.

"People said when will you stop? I won't stop until God tells me to stop," Tuner said.

If you want information on getting a free meal, or want to donate money or items, click here to visit their website.