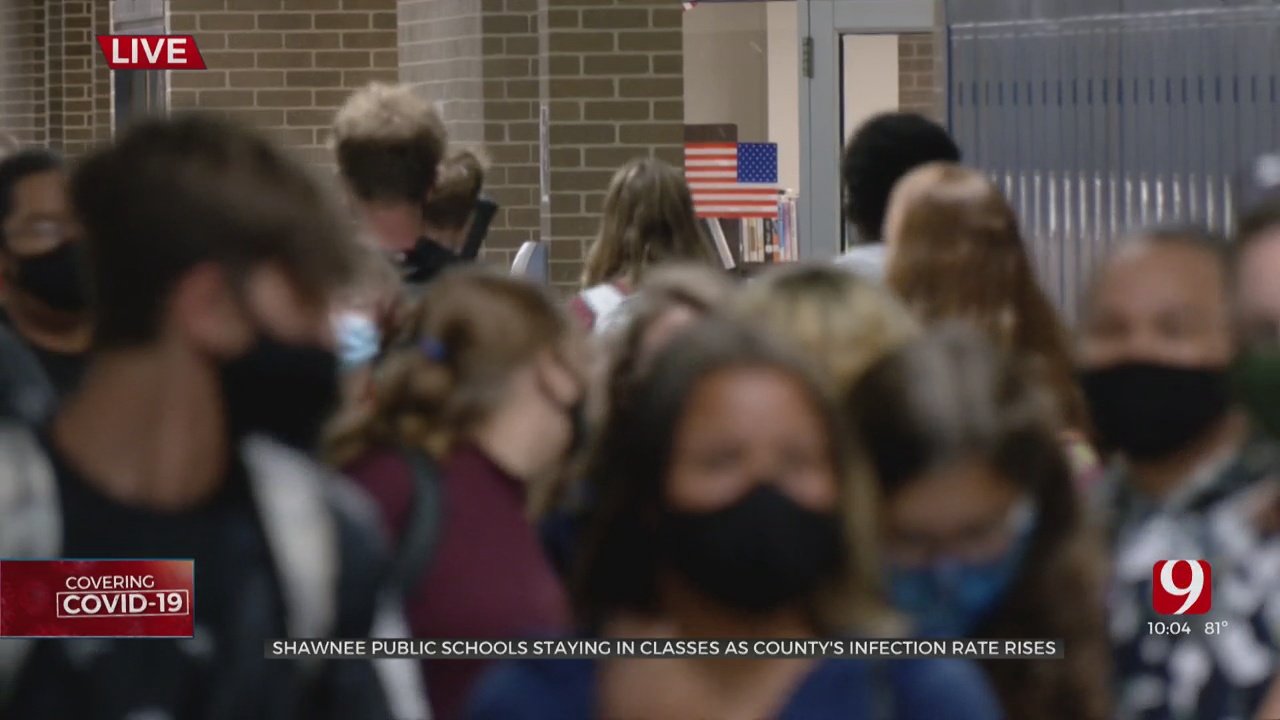 Every Friday, the Oklahoma State Department of Health updates it’s COVID-19 Alert System with the latest infection rate per 100,000 people in each county.

Some counties saw infection rates climb through the month of August, one of which was Pottawatomie County.

On Aug. 6, the county’s rate was 11.79 infections per 100,000 people. On Aug. 27, the rate jumped to 43.89, rising to the level of Orange Level 2 outlined in the school safety protocols written by the Oklahoma State Department of Education.

OSDE recommends districts in Orange Level 2 “to transition to distance learning until community transmission declines” below 14.39 infections per 100,000 people.

Dr. April Grace, the superintendent with Shawnee Public Schools, said the district has consulted with the state health and education departments about the county’s increase, and plans to continue in-person instruction.

“Everybody’s been on the same page with this,” Grace said. “We certainly wouldn’t be going to go do something that was way off the beaten path of what our state (health department) folks as well as our county folks would think would be safe for us.”

According to a spokesperson for District 6 of the State Health Department, which includes Pottawatomie County, said the increased infection rate has multiple sources.

“Naturally we have some degree of just general spread of (COVID-19) within the community, but where were seeing a significant portion of this uptick is coming from some of the correctional facilities,” said Sara King with OSDH.

The Oklahoma Department of Corrections is handling an outbreak of the virus at Mabel Bassett Correctional Facility in McLoud. More than 100 inmates were actively battling the virus as of Wednesday, according to the DOC website.

“There may be some increase in cases in the community as well, those were not enough to throw into that orange level 1 or 2. That was a result of that more isolated institutional spread,” Grace said.

On Thursday, a Shawnee Public Schools spokesperson said the district has two active cases of COVID-19 across the district. A cumulative number of cases for this school year was not provided by deadline on Thursday evening.

Other counties have also witnessed increases in infection rate in recent weeks.

In August, the infection rate in Kingfisher County jumped from nearly 11 cases per 100,000 to more than 60. One district in the county, Hennessey Public Schools, has not announced any plan to suspend in-person instruction.

In McClain County, home of Newcastle Public Schools, the infection rate rose to 15.18 on Friday, Aug. 27. In response, NPS Superintendent Melonie Hau posted a letter to families to say in-person classes will continue because the city of Newcastle was reporting fewer cases.

“Because our cases are down locally, I am not recommending changes to our instructional schedule at this time,” Hau said. “Although we are happy about the downturn in the number of positive cases for the district, this is not a time to be lax in our practice for mitigating the virus.”