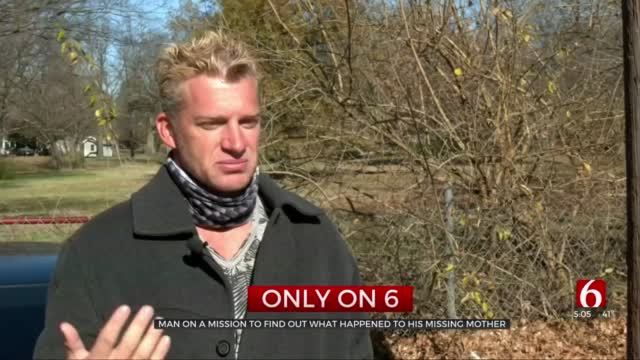 A Florida man is on a mission to find out what happened to his mother, who went missing in Broken Arrow, 34 years ago.

Rogene Helm disappeared without a trace from her Broken Arrow home in October of 1986.

Her son, Jerry Helm says he’s spent most of his life trying to convince himself that his mother just disappeared. He says he knows deep down she wouldn’t have just left him and he believes someone killed her. He drove to Oklahoma, hoping to find out who.

Helm has spent 34 years trying to deal with the pain and sadness of losing his mother.

Helm says his mother went missing just a week before his 10th birthday.

“I remember having my birthday and everyone is telling me to open presents and I said I want to wait for my mom, and they kept telling me she was going to be there,” said Helm.

His mother never came, and Helm never heard from her again.

Helm says several people told him that his mother left them and since he was just a kid at the time, he believed it.

He says he always felt like someone did something to his mother, and that’s why he decided to come to Green Country.

“I don’t really care what happened, I don’t care who was involved,” said Helm. “I think this will open it up to where somebody is wanting to say something, somebody wanting to talk. If you know anything about it please come forward.”

Broken Arrow Police say they did a full investigation when Rogene disappeared, but still to this day, it’s an open missing person case.

They say if you have any information, call Crime Stoppers at 918-596-COPS.

Tulsa Doctor Sentenced For Running Pill Mill From His Office