By: Shannon Rousseau, News On 6 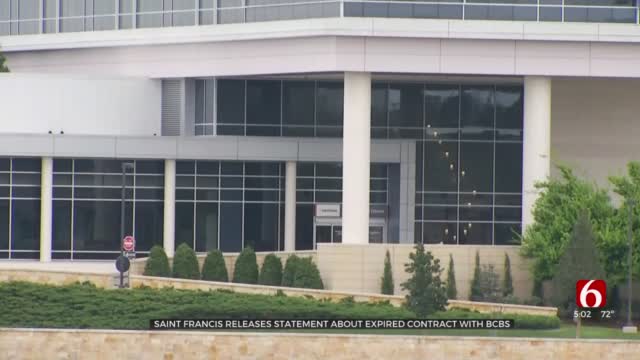 Blue Cross and Blue Shield of Oklahoma confirmed it will be ending its contract with Saint Francis Health System.

The contract ended six days ago on April 1, but Blue Cross and Blue Shield of Oklahoma (BCBSOK) is currently in a 90-day transition period. This means BCBSOK members will still have in-network access to Saint Francis locations, clinics, and physicians until July 29, 2021.

This is expected to impact about 59,000 subscriber households. Those currently receiving care for a disability, acute condition, life-threatening illness, or are in their second trimester of pregnancy could still be covered by Continuity of Care beyond July 29. To check eligibility in Continuity of Care benefits, BCBSOK members should call the customer service number on the back of their ID card.

This not only impacts all Saint Francis hospitals but also their off-campus locations and Laureate and Warren Clinic doctors.

BCBSOK said the company was unable to reach an agreement with Saint Francis that would protect members from unexpected future costs.

"After months of negotiation in good faith with Saint Francis Health System, BCBSOK and Saint Francis were unable to reach an agreement that would protect Blue Cross and Blue Shield of Oklahoma members and customers from future cost increases as the hospital system continues to grow and expand.

Saint Francis has more than 100 locations, but only four acute care hospitals. It continues to expand, adding clinics and retail locations. Saint Francis wants BCBSOK to reimburse many of its clinic and retail locations the same as the acute care hospitals. This would mean our members pay much higher rates for services at off-campus locations operated by Saint Francis. We want to ensure our members receive the right service, at the right place for the right price. This is not the outcome we had hoped for, but our networks remain strong, and we are committed to help our members who decide to transition to the thousands of other quality, in-network providers in the Tulsa metro and across the state.

As a member-owned health insurer, negotiating physician and hospital contracts is one of the ways BCBSOK protects our members and customers from unnecessary and inappropriate increases in health care costs. While we understand prices go up over time, we must be good stewards of our members’ health care dollars to keep out-of-pocket expenses and premiums as reasonable as possible."

Saint Francis Health System issued a statement. It is below:

Saint Francis Health System has been engaged in negotiations with BlueCross BlueShield of Oklahoma (BCBS) since January 1, 2021. Throughout the process the goal has been for both parties to come to an agreement that will best serve the patients enrolled in a BCBS plan by not only ensuring they have access to the state's most comprehensive physician network, but also ensuring that the medical professionals in that network are appropriately reimbursed for the care they provide. "There are countless examples across the country of patients being put in the middle of insurance company/health system negotiations--this is a situation we have wanted to avoid from day one," said Jake Henry Jr., president and chief executive officer of Saint Francis Health System. The previous contract between Saint Francis Health System and BCBS was set to expire at midnight on Friday, April 30. And, after several months of discussions, both parties agreed to a set of terms at 4:00 p.m. on April 30. Henry said, “I went home that evening feeling comforted that a deal had been reached and that our patients wouldn't have to experience the anxiety of being caught in the middle of a contract negotiation that could potentially impact their relationship with the health system." With the midnight deadline looming, Saint Francis officials were ready to sign a contract that included the terms agreed to Friday afternoon. "While waiting for the contract, BlueCross unexpectedly sent new terms at 10:02 p.m. on Friday night with provisions that had not been agreed on earlier. The added terms materially changed the agreement. It wasn't a contract that I could sign--it wasn't what we agreed to just a few hours earlier." “I am still ready to sign the contract I agreed to that afternoon. Saint Francis Health System is ready to put the issue to rest and move forward.” Henry added, “We’ve all been through a lot this past year. Our patients, healthcare workers and the community have had enough to worry about related to their health and wellness. We’re just a few signatures away from being able to put this behind us…my pen is ready."

After months of negotiation in good faith with Saint Francis Health System (Saint Francis), Blue Cross and Blue Shield of Oklahoma (BCBSOK) had worked out many of the terms in the contract, but still had not reached an agreement that both parties felt they could sign. On April 30, Saint Francis declined our last two offers and would not agree to a short-term extension to continue negotiations with no disruption in service to our members. Unfortunately, Saint Francis’ characterization of our negotiations are not accurate.

“We want to come to an agreement with Saint Francis. We tried for many months with that goal in mind, but we work for our members. It’s their premium dollars that they’ve entrusted us with. We cannot sign an agreement that could put them in financial harm. When Saint Francis comes to the table with a reasonable agreement that ensures our members are protected from unexpected future costs, we’ll sign,“ said Rick Kelly, BCBSOK Vice President of Health Care Delivery, Provider Network Operations.

The disagreement came down to the ability to evaluate future Saint Francis off-campus locations and reimburse for services at rates that are appropriate for an off-campus or clinic location. Blue Cross members would have to spend more out-of-pocket by paying a percentage (i.e. coinsurance) of the higher overall amount at off-site locations.

We are standing up for our members to ensure they receive the right service, at the right place for the right price.