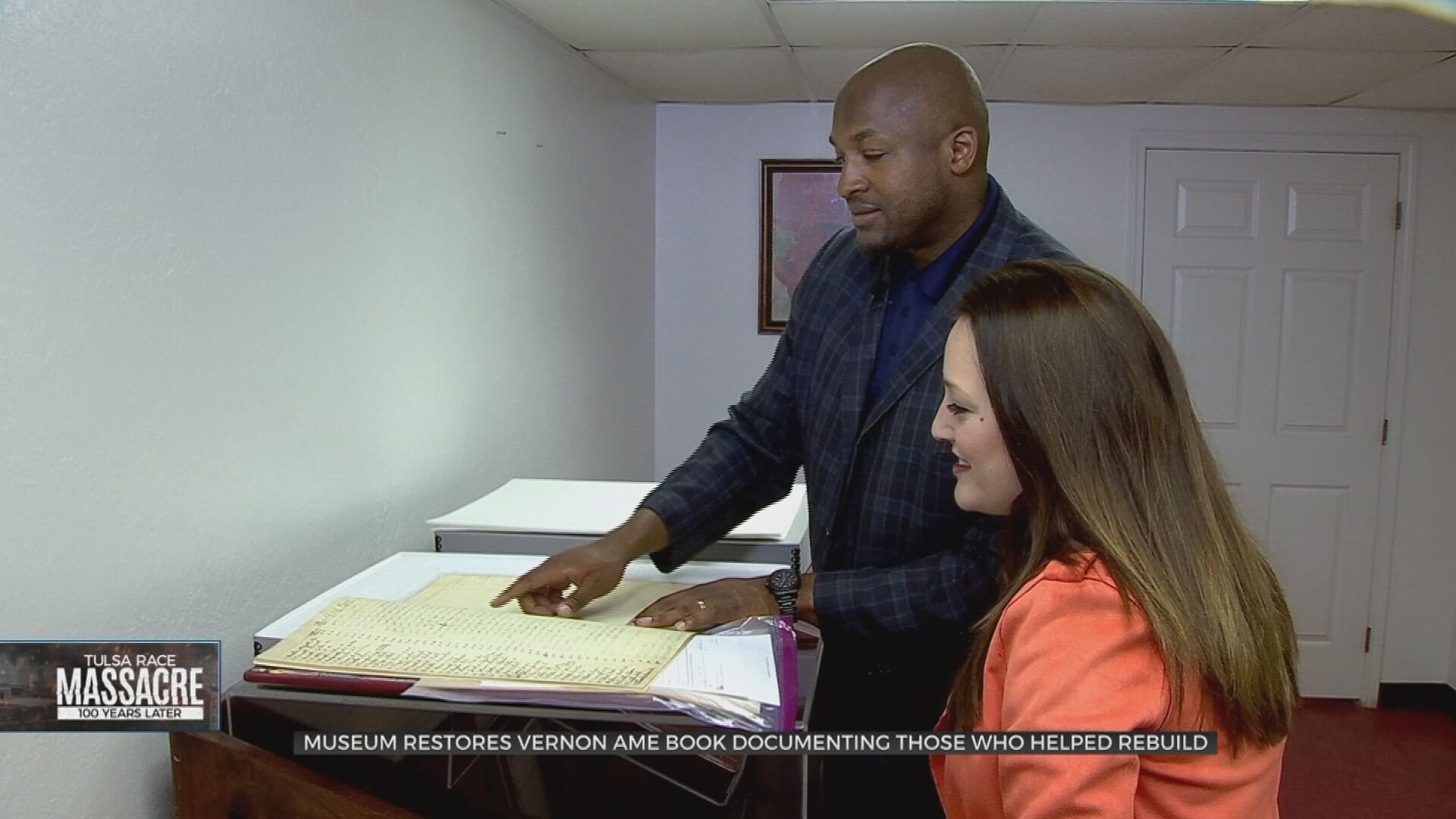 The Museum of the Bible recently finished restoring a piece of history for Vernon AME Church in Greenwood. It is a book that shows contributions made toward rebuilding the church after the 1921 Race Massacre.

The original Vernon AME Church "Book of Redemption" now sits protected in a new display case after almost a year of restoration work.

"We found it a few years ago in old file cabinet and it was greatly deteriorated. The pages were getting torn. Mildew had grown inside,” Rev. Robert Turner said.

Turner said First Lady of Oklahoma Sarah Stitt toured the church in June of 2020 during Juneteenth celebrations. Turner showed her the book and she suggested the Museum of the Bible get involved in restoring it.

“She was so gracious to introduce me to them,” Turner said.

To see what is inside the book, Turner said, turn to the replica, made by the Museum of the Bible. It lists hundreds of names and dollar amounts for contributions made to pay off debt to rebuild the church after the massacre. It also lists each donor’s address and phone number.

"And because of them, we don't have a mortgage on our sanctuary,” Turner said. “They paid it off."

"They contributed what they could. And to me that speaks volumes about this community, especially after what they had been through,” Museum of the Bible Senior Curator Anthony Schmidt said.

Schmidt said the museum's Chief Conservator led a team of about 15 people to get the work done.

"He disassembled the entire book, cleaned where he could and then reassembled things, restitched the binding and then made a new cover, salvaging as much as he could from the original ledger,” Schmidt said.

Schmidt said the museum was proud to do the work, and the team did it all for free. The Museum of the Bible is in Washington, D.C., but it has a lab in Oklahoma City, where the work was done.

"This is an important historical document that tells a really unique story about a Vernon chapel in the broader Greenwood community. And so, to have that opportunity was something that we really jumped at,” Schmidt said.

Turner said because there are so many empty pages, he plans to put the names of people currently giving to church restoration efforts in the replica copy of the book.

"The people who give now are paying to the building fund to restore what they built,” Turner said.

The original and the replica will be unveiled to the public at the church on Monday at noon.

Turner said his goal is to eventually allow people to look through the replica to search for their ancestors; and for researchers to come in and quantify the total amount of money raised.