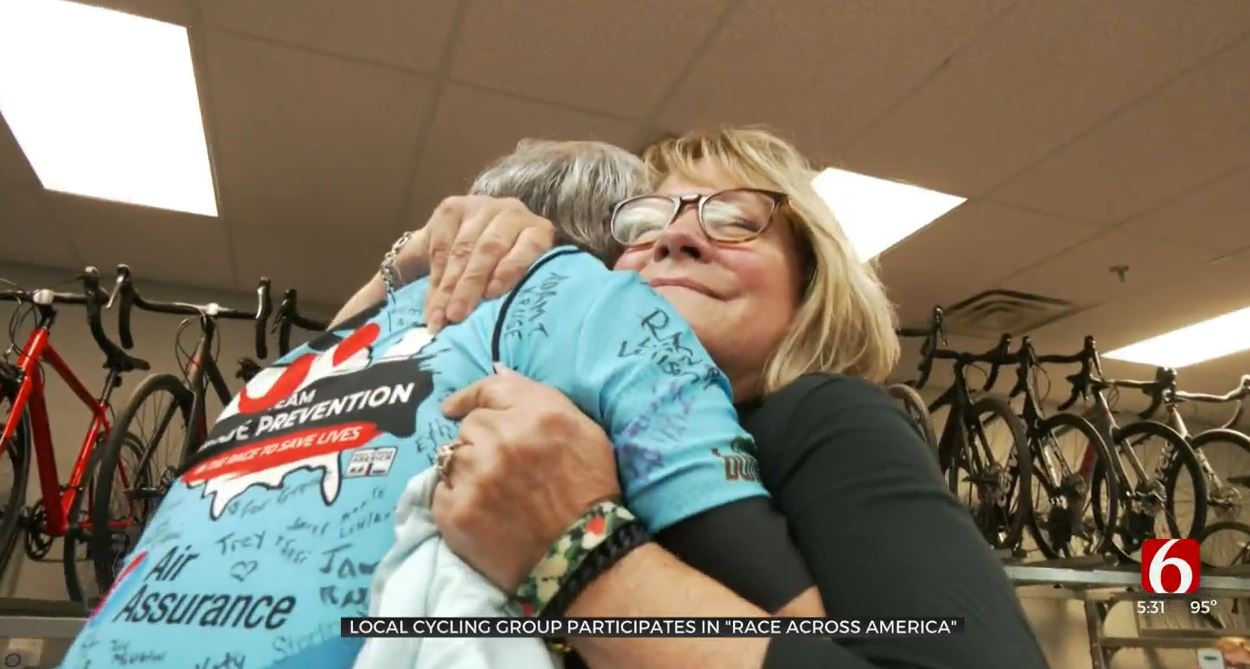 A Green Country cycling group is wrapping up day two of a nine-day trip across the country.

Team Suicide Prevention is riding in "Race Across America" to spread a message of hope and healing. News On 6 spoke with cyclists who said the journey isn't easy but neither is life.

On the outside, they look like everyday people. They're medical professionals, policy makers, IT specialists, white-collar workers and blue-collar workers.

"While they may smile and wave and say, ‘The world's great,’ we know that, statistically, somebody in our spheres in our circles are struggling," team captain Eric Gomez said.

When someone asks, 'How are you doing,' some of us have been conditioned to say, 'Fine,’ putting up a front that everything is great. In reality, many are hurting.

That was the case for April Meyer.

"There may be days where you wake up and think, ‘I can't put one foot in front of the other anymore,’" Meyer said.

In 2018, she became the legal guardian of her teenage niece who was struggling with depression and suicidal thoughts.

"She attempted multiple times, twice while under my care," Meyer said.

Wearing her niece's pain began to wear on Meyer. She was working full-time, taking her niece to multiple doctor's appointments a week, installing cameras around her house and locking up anything that could be considered dangerous.

"One day, I had some other personal things happen in my life, and I just decided, like, I don't want to do this anymore,” Meyer said. “Like I'm just, I'm just done.”

Meyer might have felt alone but said she wasn't. Now, when her mind is racing, she turns to cycling and her friends on Team Suicide Prevention.

Every day, she rides in honor of her niece who still struggles. Meyer's teammate, Eric Gomez, rides for his cousin who died in a mental health facility along with his old friend, Chip, who was a part of the cycling community before he died by suicide four years ago.

"I have literally ridden thousands of miles next to him on that bike," Gomez said.

Kevin Smith is no stranger to the struggles of mental health either.

"Being a paramedic for 20-plus years and on the fire department running ambulance calls for that long, then working in the trauma center at Saint Francis hospital for that long, I saw a lot of suicides and suicide attempts," Smith said.

That's a lot for one person to wrestle with. Smith had to retire early because of health issues.

"I had to be fused and have multiple laminectomies and tore scar tissue and damaged nerves and had a neuropathy in my legs and feet now and just chronic back pain," Smith said.

There went his income, his insurance and his livelihood.

"Kind of felt like I was letting my family down, and I didn't really have a purpose anymore," Smith said.

During retirement, Smith lost touch with the only people he felt like understood him at the time.

"It kind of put me in a place that I had seen other people in," Smith said.

However, he was able to reroute his life with the help of cycling. Smith, along with Meyer, Gomez and several others are using cycling to spread hope.

"It's a simple message: The world is a better place with you in it, and we just hope that people with travel through life with their eyes wide open," Gomez said.

Team Suicide Prevention is taking part in Race Across America which began on Saturday and has a nine-day cut off. The team is traveling 3,100 miles from Oceanside, California to Annapolis, Maryland, braving hills and summer temperatures.

"It's kind of like a furnace in your face kind of heat," Gomez said.

Getting to the starting line was a feat. It took two years and well over 100,000 miles of training to get here. They've held meetings and conducted several simulation races during the day and night.

Racers were cycling in shifts, taking turns riding full gas for an hour at a time.

"There's been curveballs at every step of the way," Gomez said.

Gomez said they experience cancelations, flight delays and many other hurdles, but that's not stopping them pressing forward.

Gomez said they've packed plenty of mental health resources to give out and are prepared to stop along the way.

"On every one of our training rides, we had people open up to us while we were in our uniform that shared their stories with us," Gomez said.

The group's youngest member, Carter Newcomb, opened up to Team Suicide Prevention after meeting them on a trip of his own. Newcomb was riding across Route 66 when his tire ruptured in Green Country.

"I'm like, ‘Man. dang it,’” Newcomb said. “I had very little money. I was really in a tight spot, and you know, I just kept riding to the best of my ability.”

Newcomb was leaving Sapulpa when his phone started blowing up with random numbers.

Sure enough, a Good Samaritan he'd met in Pontiac, Illinois saw a blog post he'd made and typed in Tulsa Cycling on Facebook that Newcomb needed help.

"Took me out to lunch,” Newcomb said. “Showed me around. Introduced me to the team.”

The meeting was a gamechanger for Newcomb, who was actively struggling with suicidal thoughts.

"Team Suicide Prevention was what cemented in my mind, you know, that strangers care, right?’ Newcomb said. “That people are there for you. That, if you need help, it is there if you want it and that you deserve it.”

"In today's culture, that's not an idea and a belief that most people are walking around with,” Newcomb said. “You know, they believe they're on their own, it's all on them and this is a cold hard world that's out to get you. And maybe, that's partially true. My trip said otherwise and you know the people that I met behaved otherwise."

Newcomb and others will take turns putting on the jersey Bill Taitano sports. Taitano said his daughter, Celestae, was a victim in a murder-suicide.

Celestae is one of many names written on the jersey. Gomez also plans to ride his friend Chip's bike for some of the trip.

The team wants to set the record straight: This journey isn't about breaking records. They're in a race to save lives.

"There are people in town that I ride with that could out-ride me up a hill in, you know, five seconds," Meyer said. "I'm not the strongest or the fittest. We're just normal people that are trying to share our stories and ride our bikes."