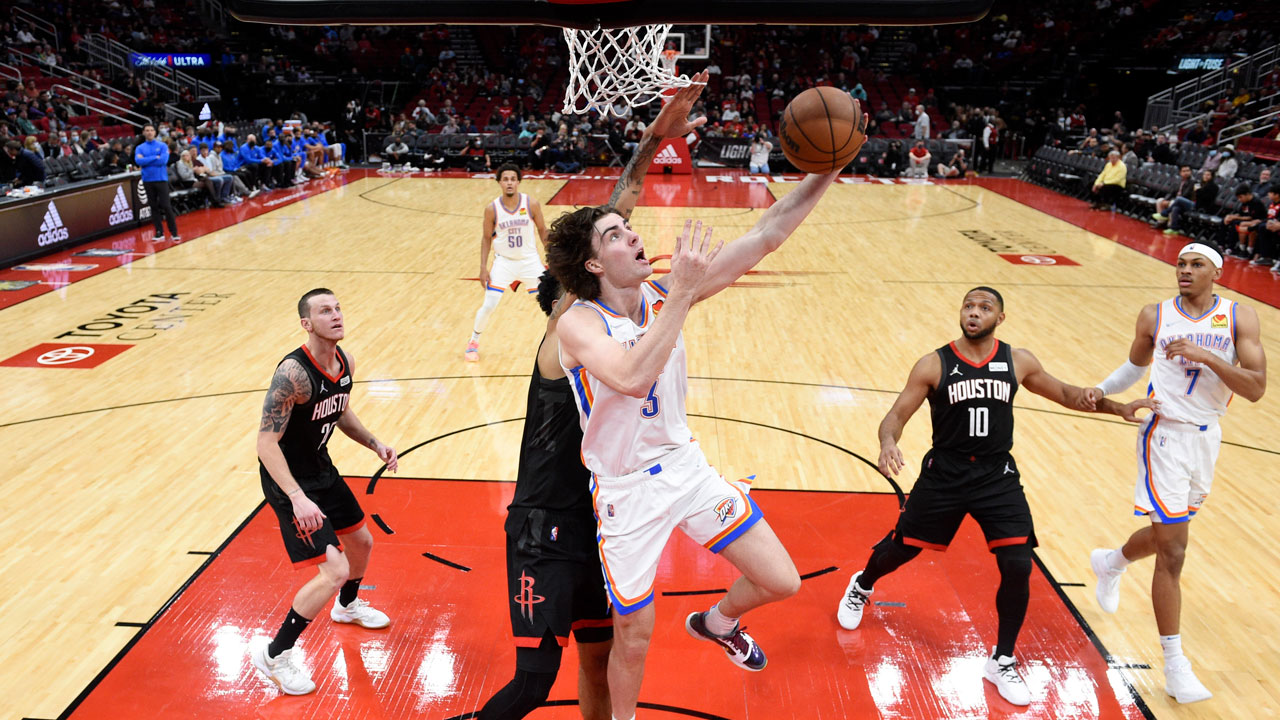 Christian Wood had 24 points and a career-high 21 rebounds as the Houston Rockets won their third straight game with a 102-89 victory over the struggling Oklahoma City Thunder on Monday night.

Kevin Porter Jr. contributed the first triple-double of his career with 11 points, 11 assists and 10 rebounds. Garrison Mathews scored 19 for the Rockets.

Houston’s winning streak follows a 15-game skid, while the loss was the sixth straight for Oklahoma City.

“We were down in the dumps for a while,” Rockets coach Stephen Silas said. “So this streak obviously feels better than the last streak that we had.”

Jae’Sean Tate said being able to string together some wins is a huge confidence boost to this young team.

“It’s great feeling. It’s a feeling that you want to get used to,” he said. “There was a long stretch where we didn’t know what a win felt like. So we’re just trying to build off every game and continue the streak.”

Wood’s performance came after he scored a career-best 33 points to lead Houston past Charlotte on Saturday night. His previous high for rebounds was 19 in April against the Clippers.

Houston led most of the night and was up by as many as 21 in the third quarter.

The Thunder got within 12 on a 3-pointer by Ty Jerome with about 8½ minutes to go. But then Eric Gordon scored five quick points for the Rockets to push the lead to 86-69.

Oklahoma City cut it to 11 later in the fourth after a 7-2 spurt, with a three-point play by Tre Mann. This time the Rockets went on a 6-0 run with a dunk from Wood to make it 100-83 with two minutes remaining.

Shai Gilgeous-Alexander led the Thunder with 22 points and Isaiah Roby and Mann had 17 each. It was a career high for Mann, a rookie who was the 18th overall pick in the draft.

“Lately, Coach has told me he wants me to be more aggressive on offense, so that’s what I’ve been doing,” Mann said.

Added coach Mark Daigneault: “He’s gonna be able to score in the NBA. He’s got that walking in the door.”

The Rockets were up by 10 early in the third before scoring the next 11 points to make it 62-41 midway through the quarter. Mathews had two 3-pointers in that span and Tate capped the run with a dunk.

The Thunder missed seven consecutive shots and had two turnovers to help the Rockets pad the lead.

Gilgeous-Alexander ended an almost four-minute scoring drought by the Thunder after the dunk by Tate to start an 8-2 run by Oklahoma City that cut the lead to 64-49. But Wood hit a 3-pointer before a layup by Danuel House extended Houston’s lead to 20 with about two minutes left in the third.

The Thunder got going after that, wrapping up the quarter on an 11-3 run to cut the lead to 72-60 entering the fourth.

Gilgeous-Alexander started the spurt with a 3 and Roby had four points, including a dunk, to help Oklahoma City trim the deficit.

Rockets: Houston rookie Jalen Green missed his second game with a strained left hamstring. ... G D.J. Augustin was out due to health and safety protocols. ... Tate had 15 points and eight assists.

WALL ON WAY BACK?

Houston point guard John Wall hasn’t played this season after he and the team decided that he’d sit out as they tried to look for a trade destination for him. But he’s recently changed his mind about his wishes for the season and could be back on the court soon.

“I did meet with John (on Sunday) and he has indicated that he wants to play and work toward that,” Silas said. “And so right now, we’re in that phase as far as getting him back in game shape.”

Silas said they’re currently in a ramp-up period to prepare Wall to play and it could take about two weeks before he’ll return. They haven’t yet decided what the veteran’s role will be when he comes back.