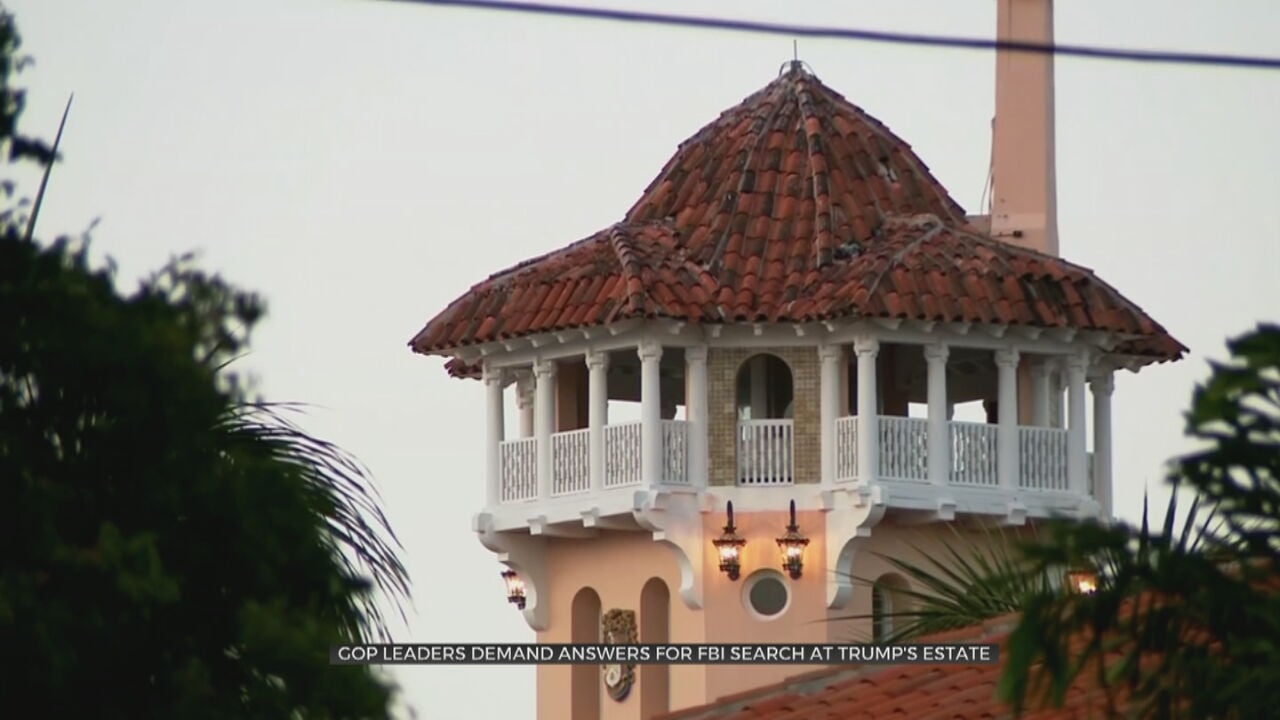 House Republicans and allies of former President Donald Trump erupted in anger late Monday after he revealed the FBI conducted a search of his South Florida home of Mar-a-Lago, with the GOP leader in the House vowing to open investigations into the Justice Department if Republicans win control of the House in the November midterm elections.

"The Department of Justice has reached an intolerable state of weaponized politicization," McCarthy wrote. "When Republicans take back the House, we will conduct immediate oversight of this department, follow the facts, and leave no stone unturned."

Sources told CBS News the search by the FBI is connected to a Justice Department investigation of claims by the National Archives and Records Administration that it retrieved 15 boxes of records, some of which contained classified material, from Mar-a-Lago in mid-January.

The FBI took boxes and documents from Mar-a-Lago on Monday, and it appears that no electronics were taken, according to a U.S. law enforcement official familiar with some of the search warrant activity and a source close to Trump. Some — if not all — of the documents are potentially classified records, the two sources said.

The National Archives asked the Justice Department earlier this year to investigate Trump's handling of White House records, and the agency told a House committee in February that it identified "items marked as classified national security information" within the boxes it retrieved and staff had been in "communication with the Department of Justice."

The former president said at the time of the Archives' referral that he engaged in "collaborative and respectful discussions" with the agency regarding the boxes of presidential records and characterized his cooperation as part of an effort to "help preserve the Trump legacy."

In response to the execution of the search warrant by the FBI, an unprecedented move against a former president, McCarthy and other House Republicans quickly accused the Justice Department of mounting a politically motivated attack against President Biden's likely challenger in 2024.

There is no indication, however, that the search was part of any effort to target a political adversary, and the White House under Mr. Biden has gone to great lengths to limit his and senior officials' interactions with high-ranking Justice Department officials regarding sensitive investigations. A senior White House official told CBS News that the West Wing was not notified of the FBI's search of Trump's home.

Still, Rep. Jim Jordan, a Republican from Ohio, told Fox News the search was "unbelievable," and said FBI Director Chris Wray and Garland should testify before the House about the actions.

The House, currently in a summer recess, is returning to Washington on Friday to pass Democrats' $740 billion climate, tax and health package.

Former Vice President Mike Pence said Tuesday that he shares "the deep concern of millions of Americans over the unprecedented search of the personal residence of President Trump."

"After years where FBI agents were found to be acting on political motivation during our administration, the appearance of continued partisanship by the Justice Department must be addressed," he wrote in a series of tweets. "Yesterday's action undermines public confidence in our system of justice and Attorney General Garland must give a full accounting to the American people as to why this action was taken and he must do so immediately."

Rep. Mike Turner, the top Republican on the House Intelligence Committee, sent a letter to Wray on Monday calling for a briefing on the justification for the search.

"In the history of our country, this action is unprecedented. As the ranking member on the House Permanent Select Committee on Intelligence, I am unaware of any actual or alleged national security threat posed by any information, data, or documents in the possession of former President Trump," he wrote. "Congress deserves immediate answers from you as to the actions you ordered."

Former Secretary of State Mike Pompeo also criticized the "apparent political weaponization" of the Justice Department and FBI, and said executing a search warrant against a former president is "dangerous."

"AG must explain why 250 yrs of practice was upended w/ this raid," he tweeted.

"We need answers NOW. The FBI must explain what they were doing today & why," he tweeted.

Sen. Tim Scott of South Carolina took a more measured approach, telling "CBS Mornings" that "we need to let this play out and see exactly what happens," while adding that "we should have been stunned and surprised and shocked with what happened yesterday."

Sen. Marsha Blackburn of Tennessee said the FBI's search was a "political witch hunt," a phrase used often by Trump to criticize the investigation by former special counsel Robert Mueller and the Justice Department into Russian meddling in the 2016 election.

While the former president and his backers are accusing Mr. Biden and Democrats of "weaponizing" the Justice Department against a prospective political opponent, Trump himself frequently attacked the department during his presidency and called for individual Democrats — including Mr. Biden, House Speaker Nancy Pelosi and California Rep. Adam Schiff — to be investigated by federal law enforcement.