Deputy Who Took Kobe Bryant Crash Photos: 'I Didn't Do Anything Wrong' 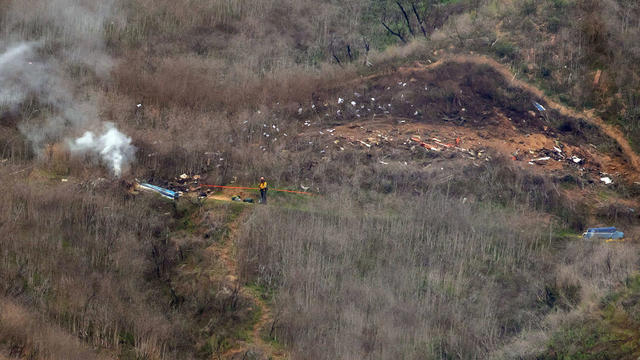 A Los Angeles County sheriff's deputy who was among the first to arrive at the scene of the 2020 helicopter crash that killed Lakers star Kobe Bryant, his teen daughter and seven others testified Friday that he "didn't do anything wrong" when he snapped 25 pictures at the site, some of which contained close-up images of body parts, and sent the pictures to others.

CBS Los Angeles reports Deputy Doug Johnson testified in federal court that he hiked for more than an hour through remote, brush-filled terrain to get to the accident scene. He said he searched the site for about 15 minutes looking for survivors, moved a handful of hikers away, and taped off the area before snapping photos on his cell phone to "document'' the crash scene at the request of a deputy at the command post.

The NBA legend's widow, Vanessa Bryant, and Irvine financial adviser Chris Chester, who lost his wife and 13-year-old daughter in the crash, are suing the county for unspecified millions of dollars for negligence and invasion of privacy over photos taken at the site. The county contends all images taken by sheriff's deputies and firefighters were quickly destroyed, no longer exist in any form and never entered the public domain. The plaintiffs say they continue to suffer emotional distress due to the possibility that pictures of their family members' broken bodies will one day surface on the internet since, as one of their attorneys told the jury this week, "digital lives forever.''

Under questioning by a lawyer for Bryant, Johnson testified that he texted the 25 photos to the command post deputy and AirDropped them to a county fire supervisor, who is still unidentified.

He claimed he lost the phone the following year in Las Vegas.

Bryant's and Chester's attorneys contend that after Johnson sent the photos onward, the images spread to at least 10 others, some of whom allegedly displayed them for members of the public.

On the trial's third day, Johnson said it never occurred to him that having death photos on his personal cell phone was inappropriate. He testified that it was "common practice'' among law enforcement personnel to share and receive images of dead bodies.

The deputy told the jury in downtown Los Angeles that he had used his phone at crime and accident scenes to take photos "thousands of times."

Johnson said deleted all the photos he had taken from the helicopter crash scene, along with a text thread with the deputy at the command post, shortly after he arrived home that night, he testified.

"I know I didn't do anything wrong,'' he said on the stand, and admitted he didn't recall ever learning at the academy that family members have rights regarding the death images of loved ones. In cross-examination, Johnson said that "photographs are the most accurate and thorough way to document'' accident sites.

Bryant left the courtroom before Johnson's testimony, which included descriptions of catastrophic injuries suffered by the victims.

Earlier on Friday, a Los Angeles woman who lost two family members in the crash testified that while attending the Golden Mike Awards gala at the Hilton Los Angeles/Universal City in February 2020, she saw former Los Angeles County fire captain Tony Imbrenda display images of remains on his phone.

In tearful testimony, Luella Weireter said she lost her cousin and the relative's husband in the crash, and was still grieving when she attended the awards ceremony. She testified that Imbrenda's wife invited her to look at the photos of Kobe's corpse on the fire captain's phone.

She also said she heard another fire official say that night that he had "just looked at Kobe's burnt-up body and I'm about to eat.''

A few days later, Weireter drove to a Malibu fire station to file a complaint.

Testimony will resume on Monday.

Deputy Who Took Kobe Bryant Crash Photos: 'I Didn't Do Anything Wrong'