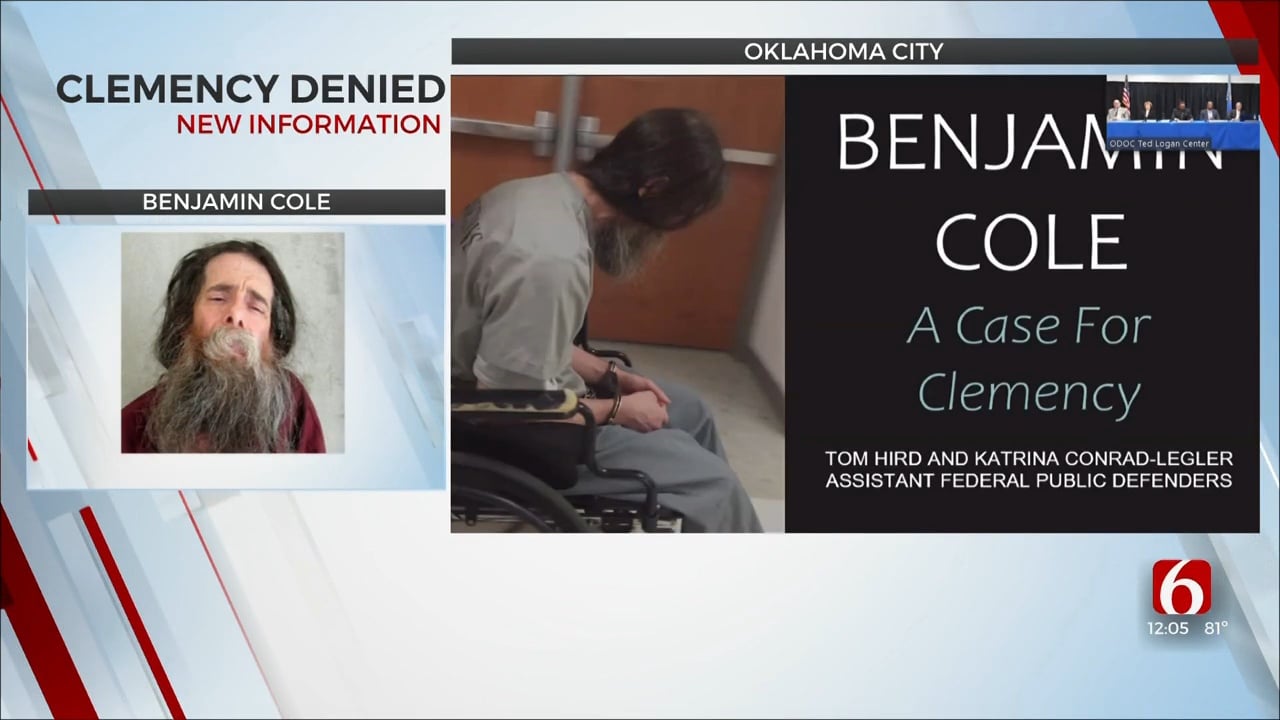 The clemency request for death row inmate Benjamin Cole has been rejected by the Oklahoma Pardon and Parole Board.

Cole is scheduled to be put to death on October 20 2002 murder of his 9-month-old daughter in Rogers County. The board voted 4-1 on Tuesday against clemency. His lawyers say while he did admit to the murder, he has since expressed deep remorse for what he did and that he is also mentally incompetent to be executed.

“Cole suffers from paranoid schizophrenia and brain damage that leaves him with no rational understanding of why the State seeks to execute him,” Cole’s attorney Tom Hird said in a statement. “His mental health has deteriorated dramatically over his years in solitary confinement, and he is now so physically compromised that he can barely move. He is not a threat to anyone.”

A Pittsburg County judge will decide on Friday, September 30, whether to order a competency trial in light of Mr. Cole’s deteriorated mental health and persistent delusions.

“Brianna Victoria Cole was just nine months old when she was brutally murdered at the hands of her own father, Benjamin Cole, Sr., on December 20, 2002, when her cries interrupted Cole’s video game. Cole, annoyed by Brianna’s crying and fussing, grabbed Brianna by the ankles, forcefully pushed her ankles toward her head, bent her back in half, and flipped her over. Cole then went back to his video game and left Brianna to die in agony in her crib.

“Brianna’s autopsy revealed her spine had been ‘snapped in half and her abdominal aorta had been completely torn through due to non-accidental stretching.’ Ultimately, an Oklahoma jury decided that death was the only just and appropriate punishment for the 2002 heinous murder of innocent Brianna. The conviction and sentence were affirmed after years of thorough reviews by the appellate courts.

“Although his attorneys claim Cole is mentally ill to the point of catatonia, the fact is that Cole fully cooperated with a mental evaluation in July of this year. The evaluator, who was not hired by Cole or the State, found Cole to be competent to be executed and that ‘Mr. Cole does not currently evidence any substantial, overt signs of mental illness, intellectual impairment, and/or neurocognitive impairment.’

“I am grateful that the Board denied Cole’s request for executive clemency. Our thoughts and prayers are with the other members of Brianna’s family.”

Rev. Don Heath with the Oklahoma Coalition to Abolish the Death Penalty also responded to the decision by saying that Cole is mentally incapable of understanding his punishment.

“Two of the five Pardon and Parole Board members voted in 2015 for clemency for Ben Cole. Seven years later, Mr. Cole’s mental condition has sharply deteriorated. A lesion in his brain has grown. He is no longer capable of communicating with his attorneys. He is no longer capable of recognizing that he is being punished. Yet only one of the five Board members voted for clemency today. There were no questions to any of the speakers. There was no discussion by any of the Board members before the final vote. This was a pro forma vote. The Board was just going through in denying mercy for Ben Cole.”