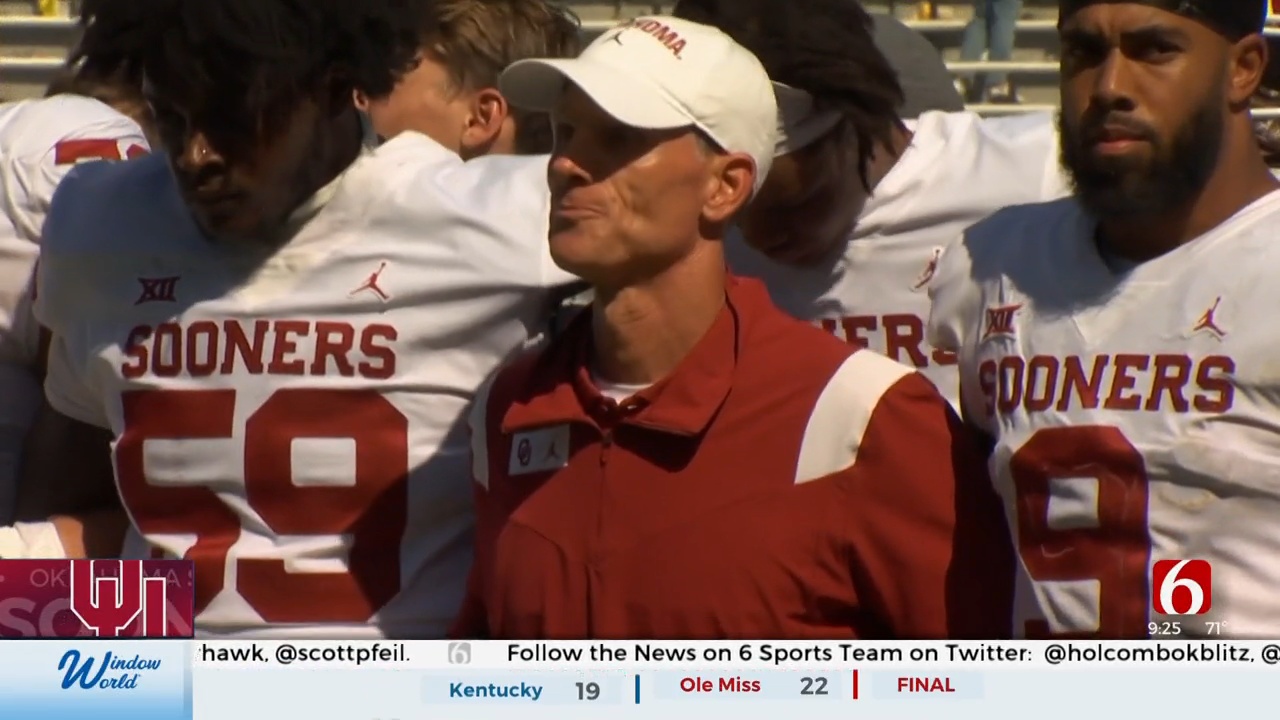 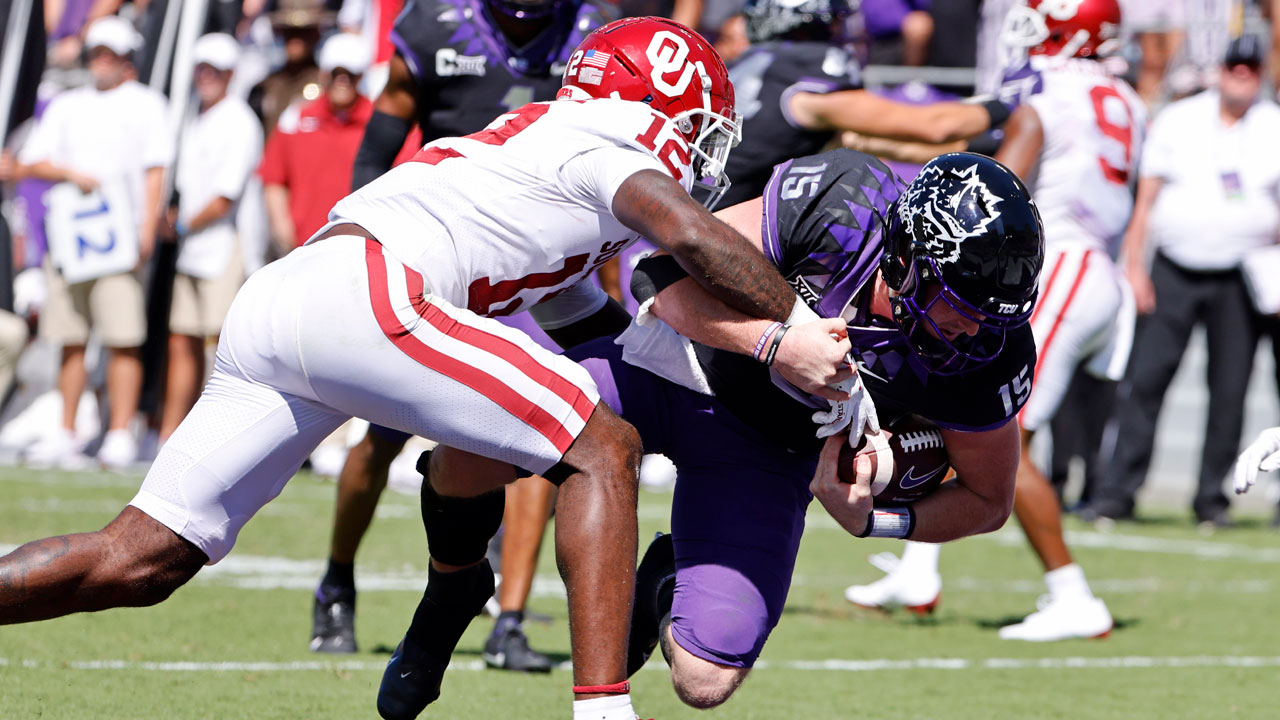 The OU offense played an overall solid game, but Lebby expressed his frustration after the Sooners got off to a slow start against Kansas State. The Wildcats stunned OU 41-34 in Norman.

For reasons in and out of his control, Lebby may not be feeling much better Saturday as the Sooners make their way out of Fort Worth. The OU offense had another rocky start against the Horned Frogs.

Come to think of it: The Sooner defense, who had its own unexpected bad luck, did not have its best Saturday, either.

In a world full of unknowns, I do know this much: The Sooners are walking wounded, their offense and defense have been all over the place and they have lost back-to-back games for the second time since 1999 (and the first time since 2020).

The other certainty: Any benefit of the doubt OU gets leading up to any game – home or away -- is gone. Some may not be ready to have that discussion.

As of now, the Sooners aren’t on the level of their future conference brethren from Alabama or Georgia.

OU is looking up at Lincoln Riley’s USC Trojans and Mike Gundy’s Oklahoma State Cowboys. We already know they’re looking up at K-State and TCU.

The instant credibility is no longer instant for OU. Brent Venables will be tasked with earning that credibility back.

The Horned Frogs didn’t just look like the better team. They clearly looked superior in their 55-24 win over the Sooners.

Maybe you lost the feed after ABC turned away from the game before it ended. Maybe you didn’t catch the game at all.

That’s why you’re here. Let’s get you caught up.

The OU offense took the ball first, insistent on righting the wrongs from the K-State game.

Wide receiver Marvin Mims caught a pass near midfield from Dillon Gabriel on the third play from scrimmage, but the ball was ripped out of his hands as he tried to head up field.

Billy Bowman, who has emerged as a leader of the Sooner defense, was injured on the ensuing kickoff return. He did not return.

This sequence of events began The Slog.

TCU had 41 points in two quarters. Both teams went into the halftime locker room two hours after kickoff.

No Dillon Gabriel. No Eric Gray. The entire offensive line practically dealt with one injury or another.

Then, the world seemed to stop.

Sooner sophomore defensive back Damond Harmon appeared to suffer a neck injury during the second half. The injury was severe enough for a cart and stretcher to be called onto the field.

Harmon was taken to a local hospital. Harmon was *this close* to quitting football in high school, according to his high school and eventual OU teammate Kelvin Gilliam, Jr.

In Dec. 2020, Gilliam, Jr. and Harmon made their commitments to Oklahoma official.

“Nothing’s going to stop me – me and Kelvin (Gilliam, Jr.) – you know what I’m saying?” Harmon said when he signed with OU. “We’re just going to lift weights to get bigger and get on the field. … In the next couple of years, I’m trying to win (the) Jim Thorpe (award). I can’t slack off, and Kelvin’s not gonna (sic) let me slack off.”

Hopefully, Harmon’s injury isn’t as serious as it appears, and his fighting spirit remains.

Second Takeaway: Head In The Game

Venables said after the game that Gabriel is under concussion protocol after he suffered a second quarter head injury.

Gabriel did not return to action but not every quarterback has had their health prioritized.

Six days ago, Miami Dolphins quarterback Tua Tagovailoa took a strong hit against the Buffalo Bills, got up and then stumbled to the turf.

Somehow, he was cleared to return to Sunday’s game and then turned around and suited up Thursday night against the Cincinnati Bengals. Tagovailoa then suffered a concussion Thursday after he took a sack. (On Saturday, the NFL Player Association fired the consultant who OK’d Tagovailoa’s return to action Sunday.)

The risk of a Gabriel return would have been immeasurable.

“If you have a concussion, and you don’t give your brain time to basically heal and you get another concussion, you definitely put yourself at higher risk for long-term consequences of that, in terms of your memory and in terms of your function and your ability to play the sport,” OU Health Dr. Amanda Celii told News 9 Friday.

The OSSAA suggests athletes should sit out for a week but acknowledges that a full recovery from a concussion could take weeks or months.

It’s nice knowing the OSSAA has stricter concussion standards than the NFL, but how will the Sooners handle Gabriel’s case? OU is reeling at 3-2 as it heads into its most important game of the regular season against Texas next week in Dallas.

Third Takeaway: In The Heat Of The Game

The hit Gabriel took was rough to watch live and on replay. It’s not worth looking at again.

As soon as the hit by TCU linebacker Jamoi Hodge hit the internet, the disparaging comments – some by OU fans and some by non-OU fans -- commenced.

It was a garden variety of insults, ranging from “you’re a disgrace” to at least one homophobic slur. After the injury, the telecast found Hodge on the TCU sideline with his head down and a towel over his head.

This is worth mentioning because acknowledging the humanity of every player involved is worthwhile. Gabriel was motionless for a scary amount of time before rising to his feet. Hodge didn’t exactly look enthusiastic after realizing what he had done.

These are young adults who are feeling different kinds of pain, Gabriel’s physical and Hodge’s internal. Hodge should not have made that hit but that doesn’t mean he deserves to see a sea of negative tweets.

It’s not good enough to view one player as human and the other as inhuman.

You can’t have it both ways.